A hiss, not a roar. New Zealand

The Covid-19 lockdown has kept international hunters at home and meant a very lean season for their NZ guides, as Annabelle Latz reports.

The stags were roaring, yet not a hunter was to be seen.

Owing to Covid-19 lockdown rules there were no trophy hunters gathering from around New Zealand or abroad to enjoy the roar this year.

John Royle of Canterbury Tahr Hunter Guide NZ has been guiding for more than 12 years and this was the first time ever he’s been ground to a halt during the roar, his most lucrative season with full appointment books. He has lost potentially three months’ business.

“It’s the same with every hunting guide, and it’s going to be pretty limited basically until the borders open.”

He hunts mainly on Crown land and his clients come predominantly from Norway, Spain, New Caledonia, Australia, and France (he used some of his spare time during lockdown to learn French).

“All my clients have rebooked for next year, they all still want to come to New Zealand, which is great.”

He says most of the guiding companies are like this.

“Yes it’s a bad thing for this year but a great thing for next year.”

John is an arborist so counted himself lucky he did not rely solely on his guiding business for income, and has a few clients booked hunting tahr and chamois in spring.

Although John will not be adjusting his prices this year he predicted that some high-end guides, but not all, will adjust their rates for the New Zealand market, especially those who almost solely operate in the American market.

“The guides will respond to the market.”

The flow-on business effects from the downturn in guided hunting were also harmful to the New Zealand economy.

“When my clients come to hunt, they also spend a lot of money in New Zealand.”

At Mungunui Hunting lodge, near Waitomo in the King Country, Mat Hall had to write off the 2020 season. Most guides had only just started their season with international clients when lockdown hit, and Mat says the 48 hours notice was very stressful in revising their schedules for the future.

“Even during the 2008-2009 global financial crisis we didn’t have it as brutal as this.” He says many hunting businesses aimed at international hunters will be under extreme financial pressure now.

to run a business that’s had nearly all its income wiped out for the year.”

Mat makes antler chandeliers as an offshoot of his operation and has expanded his business to domestic hunts.

He acknowledges it takes time to be known and set up for this, with most operators offering trophies such as big red stags, fallow bucks, and bull tahr that would not usually be booked by New Zealanders.

He was busy checking boundaries, general maintenance, and working alongside police catching poachers in late April right up to the last day of alert level 4 of the lockdown.

He is optimistic about the future for his business, which he established in 2001, but believes the lockdown on the world economy will possibly affect hunters booked for next season. “You have just got to make the most out of the situation and carry on the best you can.”

New Zealand Professional Hunting Guides Association president James Cagney says having no roar this year and a drastically shortened hunting season has been a huge setback for the industry with no international visitors.

“American hunters account for 81%, Australian hunters make up 5%. The international market makes up around 99% of our industry’s client base.”

James is based at Lake Coleridge and hunts on private high country stations and Crown land, and guided three international hunts this season before lockdown.

“We don’t have a peak summer season, our peak season is autumn, but we were dead from mid-March.”

Adjusting prices to encourage domestic hunters for the rest of the year will be an option for only some of the guides such as the ones like James who provide free-range hunting, although even they have fixed costs like lease agreements they must meet. Although this will help, it will not replace the loss of business.

The high-end hunting lodges that cater for wealthy American hunters will have a harder time bringing prices down, with high overheads they cannot offset such as trophy stags on properties and the upkeep of their properties.

“The nature of the guided hunting business, particularly with the high end, is very front loaded with marketing at the US show circuit in the Northern Hemisphere winter, property leases, and buying stags.

We will just have to hold tight until the borders open up. We need hunters coming across the border, and without them the majority of hunters can’t operate.” Stags will be in hard antler through the rut, and heading into winter will need extra feed if they’re not to lose condition.

Moving stags to other properties with more feed may be a consideration but poses its own difficulties such as TB testing, tracing through the NAIT system, and having secure laneways and farm facilities to enable transportation.

“The big question now is what is their value. They can be used again next year but may not have the same value.”

There is also a question mark around next season happening, although many clients have rebooked for 2021.

“We are watching closely – that is going to be the real cruncher for us.”

James says the most important factor to remember is that tour operators are rural people, farmers, and hunters so they are resilient. Now could be a great opportunity for New Zealand hunters to consider taking domestic guided hunts, which can be done through the New Zealand Professional Hunting Guides Association. 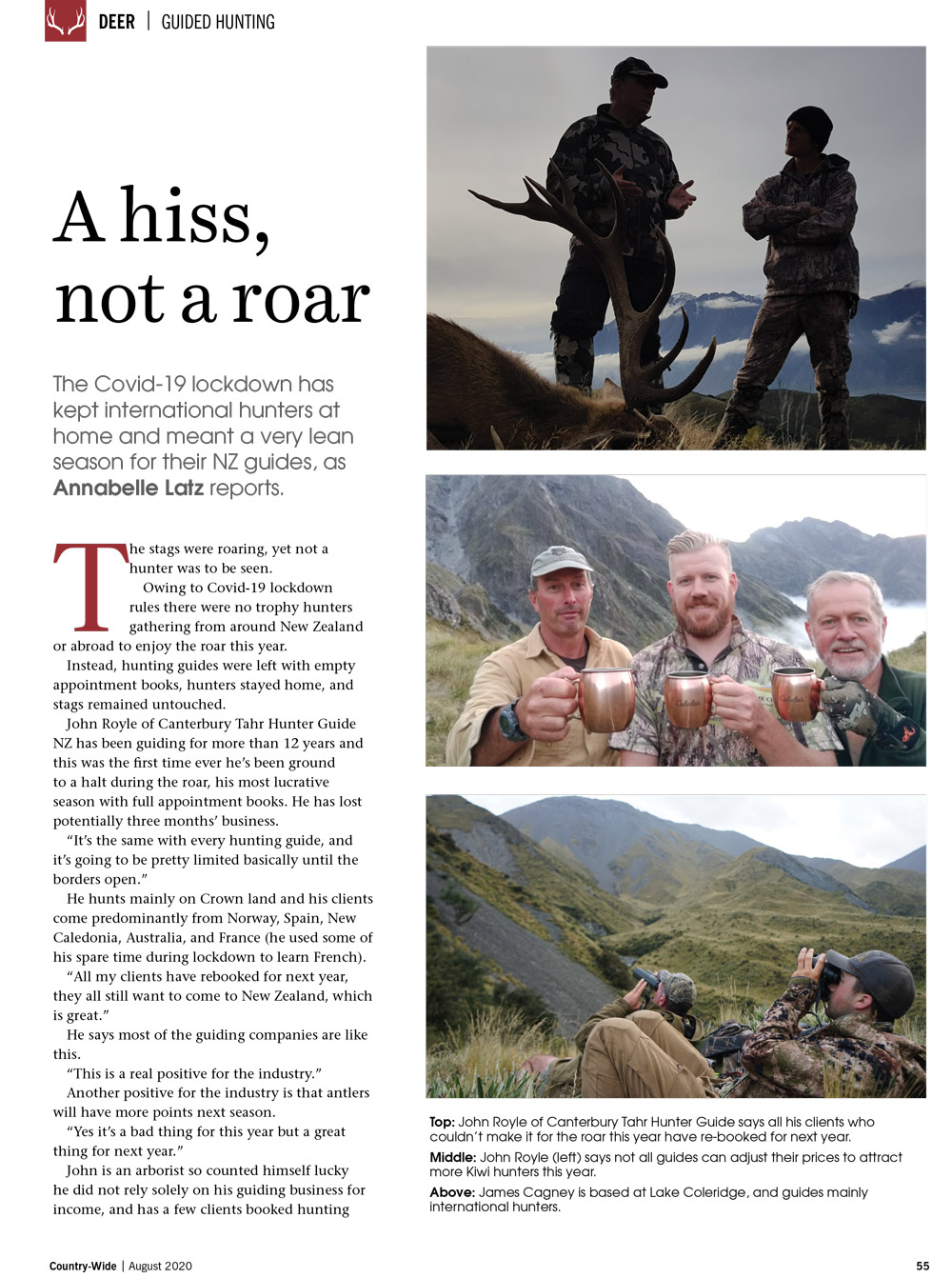 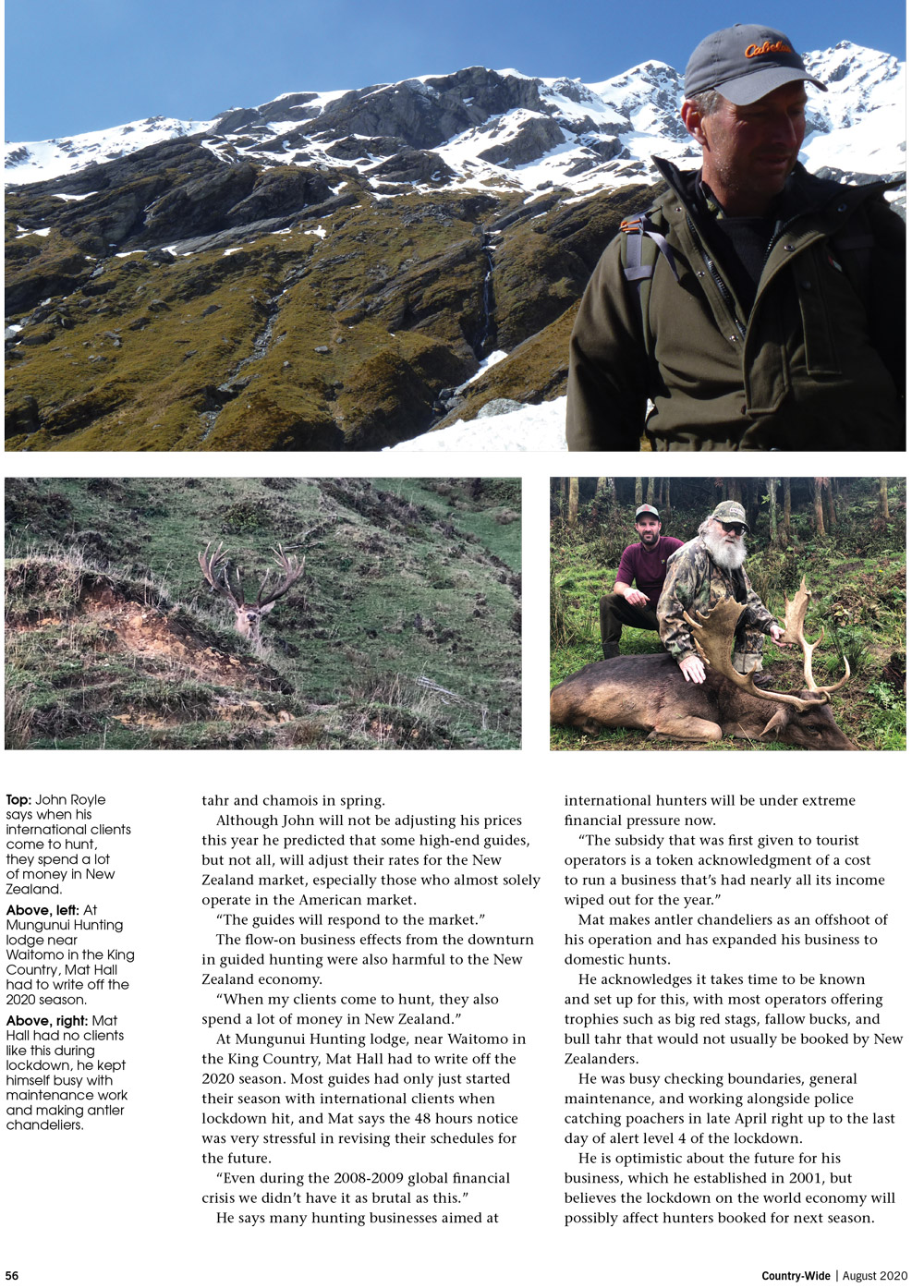