It was smoko time for Shaun Monk up at Island Hills Station.

He was taking a five minute break from his chain sawing work, lying on his back on the hiking trail he was in the middle of cutting.

“I looked up into the beech trees and saw the territorial battle of a bellbird versus a tui. Although he was much smaller, the bellbird won, puffing his chest up to make himself bigger. It was so cool to watch.”

There are so many reasons Kiwis love exploring their own backyard, and for Shaun, getting close to nature is just one of them.

Turn the clock back to May, the end of lockdown was around the corner, and up at Island Hills Station in North Canterbury the ideas cogs were turning. Shaun Monk would be one of the first to admit his pocket suffered due to Covid-19, with no guided hunting right through the heavily booked red stag roar. But this downtime also provided a chance to think about the future.

Owners of Island Hills Station Dan and Mandy Shand used to run a very successful hiking business on their farm called Hurunui High Country Track. After a bit of discussion over a cup of tea in late autumn they collectively decided a rebirth of this venture was a great idea. Thus, Island Hills Station walking track was born.

GPS tracking, utilising trails already there set by wildlife, scrub-cutting and being on the end of the chainsaw has been a familiar way of life on and off for a couple of years for Shaun as he was establishing trails for a guided hunting business. But since May and the plan for the revamped walking track, it’s been full noise.

“I figured, I might as well go for it, put all resources into it. Go balls in.”

Island Hills Station is 7000 hectares, of which half is low-input extensive sheep and beef farming, the remainder being non-grazed reserve, including Canterbury’s biggest parcel of QE11 Covenant at 600ha. Shaun, originally from the West Coast, came out to Island Hills Station several years ago for a visit to do some hunting and recreation.

The walking track opened in October, the self-guided two or three day hike taking in the rolling hills of the farmland, and the conservation land boasting forests of regenerating beech and manuka, filled with the sounds of bell birds and an increasing number of other native species.

He says over the past several years there’s been a noticeable increase in bird numbers. Bush Hut and The Valley Camp are the two well equipped huts on the track, with hikers arriving on the evening pre departure and enjoying a night at the Cook House down by the homestead. The trails are well marked and achievable for anyone with a keen spirit for adventure and a few kilometres of walking under their belt. It’s technical enough to make it feel like a real back country adventure, yet still allows for a sense of relaxation, especially when all of your gear is carted to the huts for you.

“The track definitely has some challenges, but we will focus on ensuring it is safe.”

Mount Skedaddle stands at 1700m and those keen for an extra few kilometres are more than welcome to ask Shaun for a guided hike to its summit.

“I want to keep the guided off-trail options open too, there is always someone keen for an extra challenge.”

The close presence of history is hard to miss. Track markers including names like Upham allow the mind to cast a thought to who once graced this land.

“And that trail over there,” Shaun says, pointing to a well worn grassy trail near the base of the Organ Mountain lying to the west, “was a well used packhorse track from the northern part of the South Island through to the West Coast before the Lewis Pass road was built.”

Even on the worst weather day, life is not too bad up at Island Hills Station. Shaun says the Nor’West trickles over bringing a bit of wind, but not too much rain.

“It’s very forgiving here, it would be a very rare occurrence that a booking will be cancelled due to the weather.”

The keen conservationist will enjoy hunting guiding in the cooler months when the trails are closed.

“I was sitting sharpening my chainsaw a few weeks ago at Organ Creek when I heard some sloshing in the water. I looked up and saw four deer, who just all stopped a few meters away and looked at me. They paused, then walked away. It was such a nice encounter.”

The long term goal is to up the predator control efforts on the farm to the point where introducing endangered birds could become possible.

“Imagine having kiwi roaming around here, I’d love to see that in my lifetime.” Shaun said it was a lot of hard work and he and his helpers were going “hell for leather” to get it done.

“I still haven’t seen every part of this place yet. It’s such a cool farm to explore, and it excites me to show this to people.” 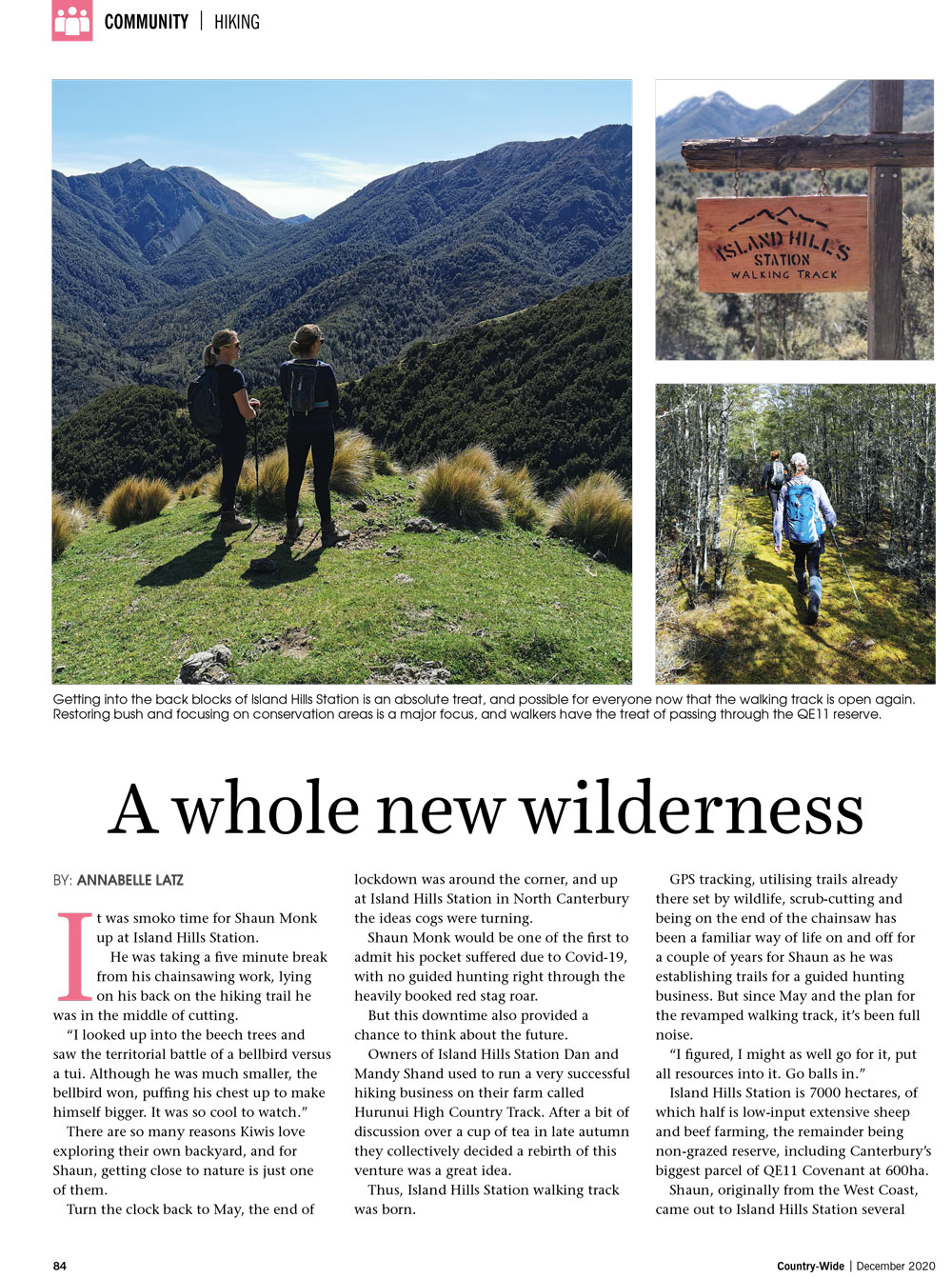