Appreciating it all, New Zealand

Words and pictures by Annabelle Latz

The Satterthwaites of Marlborough recently mustered their Merino flock together for the first time as a family. This year’s autumn muster was one for the history books for the Satterthwaite family at Muller Station in Marlborough. Parents Mary and Steve and their two children Alice and Ben were for the first time ever as a family, bringing the 4500 Merino ewes out of the Acheron Valley and into the Awatere Valley for the winter months. The 1800 two-tooths had been mustered in earlier, due to the drought. In years gone by, boarding school, university and work commitments, or living abroad has meant one of the children has always been preoccupied during this iconic week of the annual farming calendar. Alice, 24, has taken the reins of head shepherd for the time being, and with mentoring from Steve will move into the role of stock manager. Her plan is to learn as much as she can, before handing the tuition reins over to her little brother Ben, 21, while she heads away for a stint to learn some more skills either in another part of New Zealand or overseas.

“I haven’t done the North Island yet, and it’s something I want to do to gain more knowledge in different areas. The idea is to come back home eventually.”

Ben is enjoying time back home on Muller Station, having recently finished his studies at Lincoln University. He’s soon heading north to Gisborne to learn the ways of East Coast station life. Alice is thoroughly enjoying stepping up in the responsibility ranks at Muller Station, especially on the autumn muster with the whole family and their two permanent shepherds involved. “It’s the highlight of the year, the tradition of being out here doing it, enjoying both the physical and mental challenge.” Organising the team and the beats on the muster provided Alice an opportunity to muster some country for the first time.

“It’s great to gain some experience and knowledge from dad, so one day when he’s not here I can run the camp myself.”

Alice has always known the farming sector is her career calling, and although at boarding school in Christchurch she enjoyed team sports during the week, nothing jeopardised her ability to head home for as many weekends as she could to lend a hand on the farm. After school she headed to Clayton Station in Fairlie, South Canterbury for a year. This was followed by stints abroad including working on a cattle station in Derby, Western Australia which she “absolutely loved,” time on sheep studs in South Australia and New South Wales, back to the South Island for two seasons on Muzzle Station, Kaikoura Ranges, and time in England working on an estate in Hambleden, Henley on Thames, an hour south-west of London. Alice has always enjoyed her stints back home on Muller Station, the world of high country isolation with her team of dogs marking her favourite place.

“I love the feeling of just being out there, in what seems like some pretty untouched uninhabited country, almost getting the sensation that you are the only one who has been there.”

Sheep genetics is of huge interest to Alice, and she was very involved in the Marlborough two-tooth competition earlier this year, which Muller Station won. Muscle and fat makeup and conformation are a continual focus in the breeding operation at Muller Station. Alice said selecting objectively measured genetics at both a commercial and stud level has made significant progress in sheep performance and health, therefore helping to boost the bottom line. “The incorporation of ASBV’s (Australian sheep breeding values) along with selecting for phenotype has really boosted muscle and fat and therefore fertility and do-ability across the stud and commercial flocks, without compromising on wool quality and quantity.”

At the competition, Alice spent some time with Dr Mark Ferguson, the man behind NeXtgen Agri and the podcast Head Shepherd. His ethos is one that resonates with Alice; ‘Farming in our hearts, science in our heads.’ She says some people don’t know what to do with breeding values and how to incorporate them into their breeding operation to make their sheep more profitable. NeXtgen has created a platform whereby people of all backgrounds can make use of the team’s objective knowledge.

“It’s great to gain some experience and knowledge from dad, so one day when he’s not here I can run the camp myself.”

Muller Station is a NeXtgen client, and they work closely with Will Gibson who helps to class the sheep and analyse the data side of the stud flock. Alice said this data is invaluable, as individual sheep are assessed on both phenotype and genotype along with their maternal history. All the scanning material, complete breeding history, number of lambs weaned, (bred vs weaned, which helps with decisions about what to keep), and estimated breeding values are all gathered. “We class the hoggets before we class the ewes, so we can see whether it’s a good lamb or not, was it the right sire, was it a lazy mother, and assess the weaning weight.” The Merino industry is one that Alice says is an exciting one to be part of, with lots of space for the future especially in the areas of sustainability and the environmental enhancement.

“I think it’s a pretty safe industry to back; who knows what we will be using Merino wool for in 10 years’ time?”

The approach to Merino farming is much like the approach to anything someone has a desire and passion for. “If you have a keen interest, and a bit of a ticker behind you, just go for it.” Alice’s mum Mary said the love Alice has for farming life has been obvious since she was in a pram. During one autumn muster many years ago, Alice rode her pony Pepper all the way through to Munroe Hut, but riding any further was deemed too much for the infant. “She wasn’t allowed to ride through the Munroe Saddle, so she cried all the way home. I remember she used to sit on Steve’s pommel, she was basically born on a horse.” Despite the challenges of high country life, whether it be the weather or the market trends, it’s the sense of achievement after a good day on the hills that will always drive Alice to be where she is ultimately happiest.

“It’s when you’re out on the hill and you come in … and feel truly lucky to be here, sitting on the veranda with a beer in your hand.” 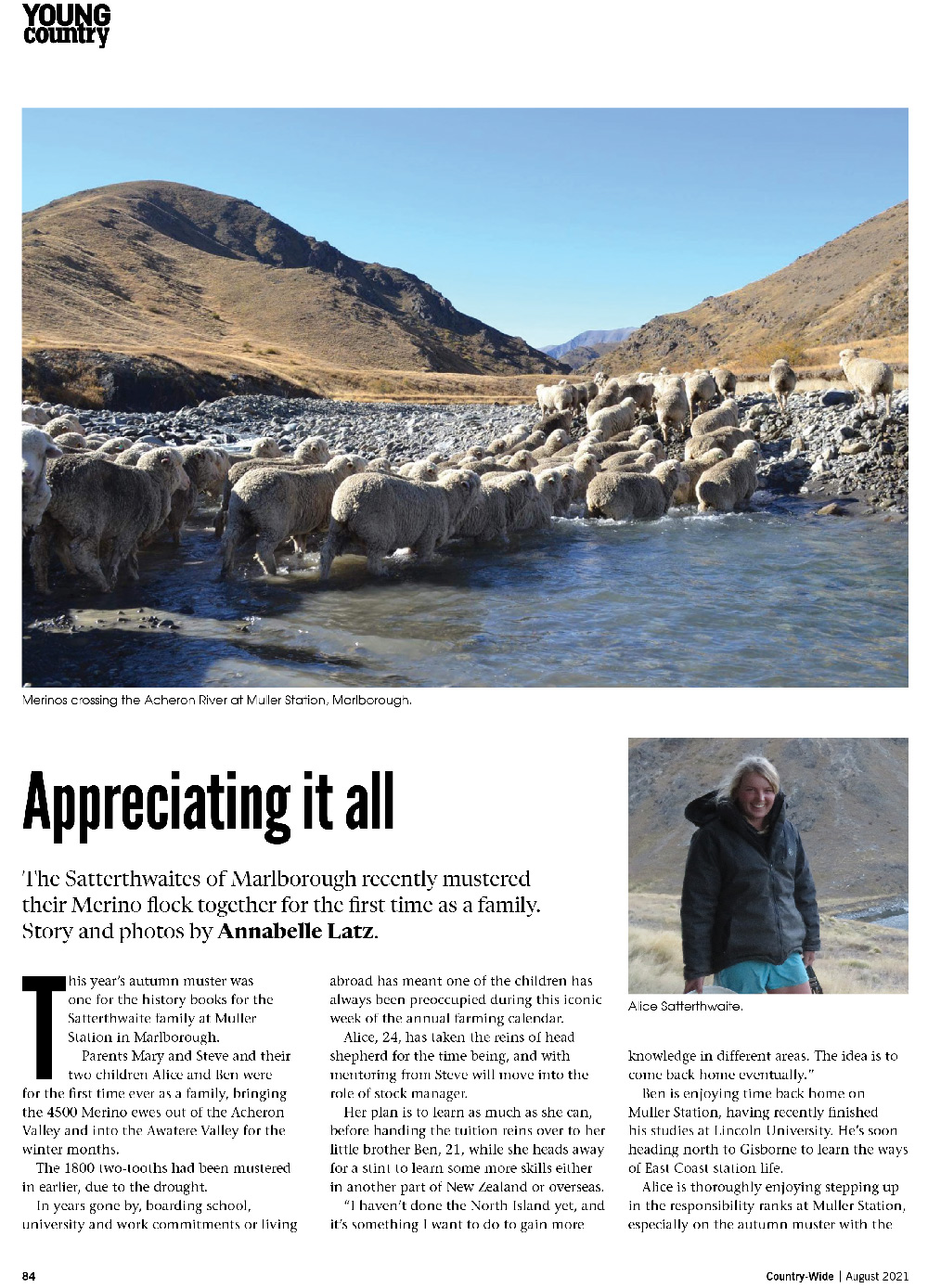