Apparently, a few decades ago you’d need your temperature taken if you were thinking of farming Merinos in the North Canterbury high country. With an annual rainfall of 1100mm and clay-based soil, out the back of Culverden neighbouring farmers the Reeds and the McRaes knew not everything was in their favour, but it was a challenge they were willing to accept, and they don’t regret it. Graham Reed and Beau McRae have been great mates for nearly 50 years. Graham and his wife Anne moved to The Grampians from Sheffield in 1973 when Beau and his wife Georgy were on Glens of Tekoa just down the road. In the mid 1970s Beau’s flock was all halfbreds with no wethers, but relying on the market of selling store lambs was no longer quite cutting it for the account books. Knowing he needed a change in direction, Beau chose to focus on a bigger type of Merino which he could cross with a halfbred, riding the wave of the juggle between retaining vigour and producing a stable type of sheep. Graham followed suit a few years later, departing from his 15-year tenure of Corriedale breeding at The Grampians, due to the frustration with the wool market and the price of meat.

“I figured I could grow better wool on Merinos and get better prices,” he says.

Graham and Beau both ran split flocks for a while, keeping their foot in the door of the lamb prices that did pick up again. “Crossbreeding did pay the bills, but so did the wethers,” Beau says. They both ran substantial stock numbers, which varied in ratios of halfbreds and Merinos over the years, eventually both choosing Merino flocks once the footrot problem dissipated. “Numbers varied year to year, especially with hogget numbers,” Graham says. Australia was making the wool price picture look good at the time, guaranteeing $7/kilogram, then $8/kilogram.

Beau recalled Australia flooded the market at such smart prices, so prices then fell by half in the 1990s. “But even at $7/kg, it was still better than what we were getting for the halfbreds.” Back in the 1980s, land development subsidies, stock incentive schemes and suspension loans all created a colourful picture for New Zealand farmers. Through the 1990s the fine wool struggled at about $7/kg. The NZ Wool Board threw farmers a lifeline by setting the minimum price. The wool began to stockpile in NZ and even more so in Australia, the demand for high end clothing such as Italian suits not quite being at the rate some had predicted.

Farmers started to chase the mid micron range, and even up to 19m which was deemed the best option for sports clothing because it was durable and comfortable. “It was all about the prickle factor, and the quality of the wool,” Graham says. Another factor taken into account when producing Merinos in less traditional Merino country, was the necessity to run more cattle. But they made a great job of cleaning up the native land, Merinos following and finishing off the job. Both farmers ran between 40-50% cattle stock units.

The flipside was that the higher the ratio of cattle, the less parasites in the sheep. In the earlier days, all the sheep would go on the native blocks in the autumn, and they’d lamb at about 85%. This method was tweaked in later years, whereby just the wethers would go out on the native land and the ewes would stay on higher-quality pasture.

Top dressing was a good solution to increase feed, because quality wool was all about that, but “then came the footrot”. “We were spending a lot of time tipping over sheep,” Graham says. It worsened in the 1990s with severe cases where sheep would find it difficult to move around and eat, creating breaks in the wool. “The average condition score would be well down, there was no doubt about that.” Beau was also battling with carpal tunnel syndrome in his hands from the constant foot trimming, so some tough decisions were being considered and there were thoughts about whether to carry on with Merinos or not. But then there was a turning point.

Near the end of the decade came the development of the footrot gene-marker test, thanks to Professor Jon Hickford from Lincoln University. Early days of the test involved blood testing Merino rams around the South Island, to see if there was a genetic link to footrot. Beau and Graham were both an instrumental part of this research, having been involved in the local branch of Federated Farmers and knowing about access to the Ministry of Agriculture’s Sustainable Farming Fund. So they applied for $300,000 to utilise this technology and arrange for stud rams around the South Island to be blood tested, given fellow farmers would get on board.

“It was about promoting this genetic technology, we worked out that the best approach was to give the money to stud breeders to test their own rams,” Beau says. A dozen studs around the South Island took part, the goal to find out what key sires did or did not have strong genetic links to footrot resistance. It was revealed that one particular MHC (major histocompatibility complex) gene called DQA2 was associated with sheep having a greater or lesser likelihood of developing footrot. This research became the basis of a gene-marker test that enabled sheep breeders to identify sheep that were considered less likely to develop this debilitating condition.

Beau says the main thing they learned was there was a genetic factor involved in footrot, it was quite heritable, and they could breed sheep that were resistant to it. “We’d start culling and stop treating, because beforehand we’d basically been breeding it.” Rams were ranked on a score of one to five, depending on the level of alleles, a gene variant (one of a pair of genes that appeared on a particular chromosome if the DQA2 gene was prevalent). Therefore, the idea was to have two ones which meant they were reasonably resistant. Beau admits it really hurt to cull an $800 ram or ewe with quality fleece because it had footrot. “That was a real lightbulb for me, we never knew there was a real genetic influence at all,” Graham says, adding that once they changed their method from treatment to culling and stopped vaccinating straight away, everything changed. It took about five years to see a difference, but it was a game changer in Merino farming and once they stopped tipping sheep all the time, they wondered how they ever did it. Into the 21st century, and Graham says farming Merinos began to paint a different picture.

“Footrot was no longer an issue for us, we didn’t need to trough or anything.”

In the early 2000s wool prices were at the lowest they’d been, while cattle prices were good and the fat lamb market wasn’t looking too bad either. Thus began a shift in focus to breeding a dual purpose sheep, pushing carcaseweight and good constitution while retaining the quality of the fine wool. Breeding for internal parasite resistance also became a reality. Producing an animal they are proud of is what Graham and Beau find most exciting about the Merino industry, where they can offer a product in high demand around the world. “It’s pretty satisfying to have a better clip, and if you get more weight too then that’s the deciding thing,” Beau says. 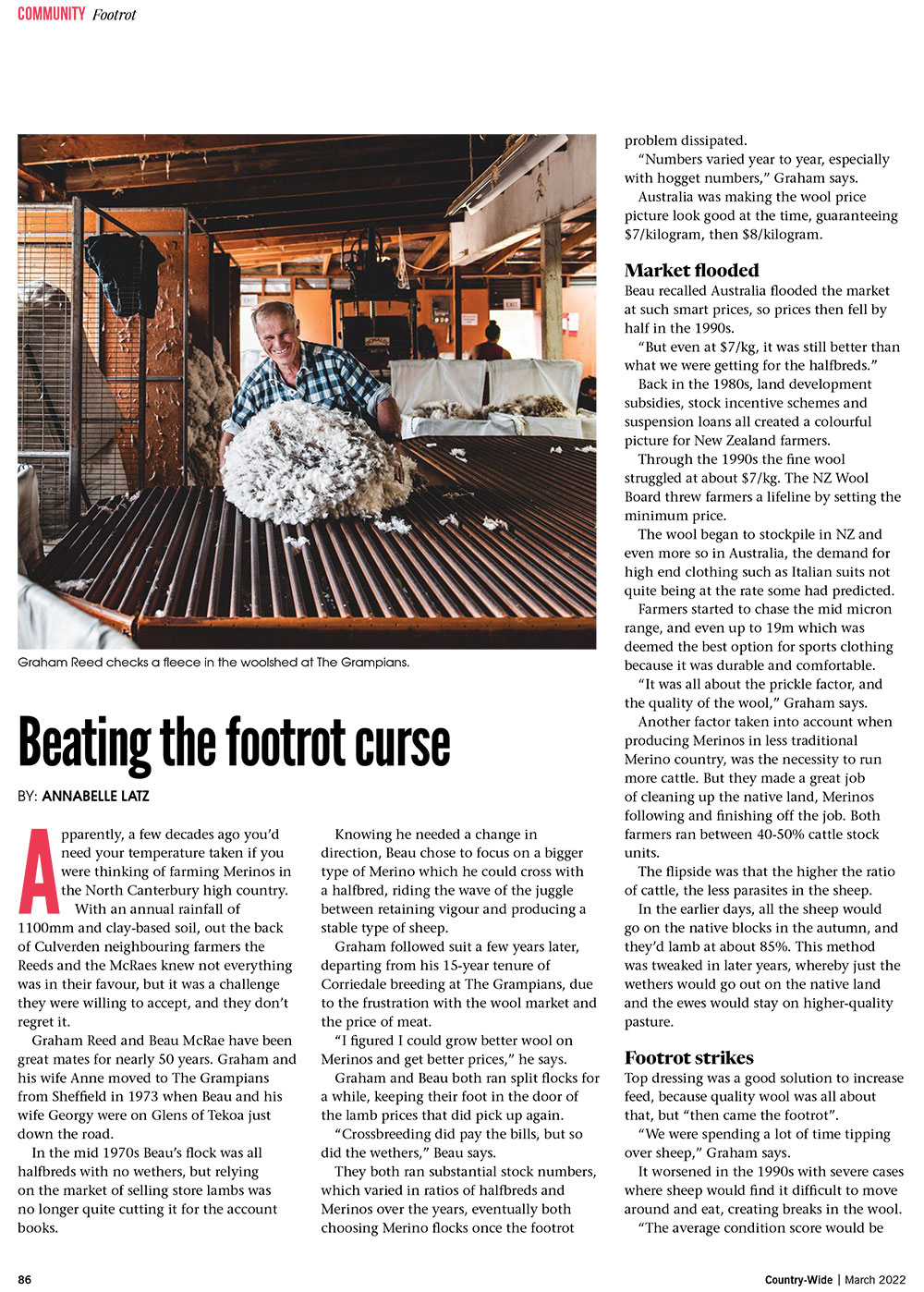 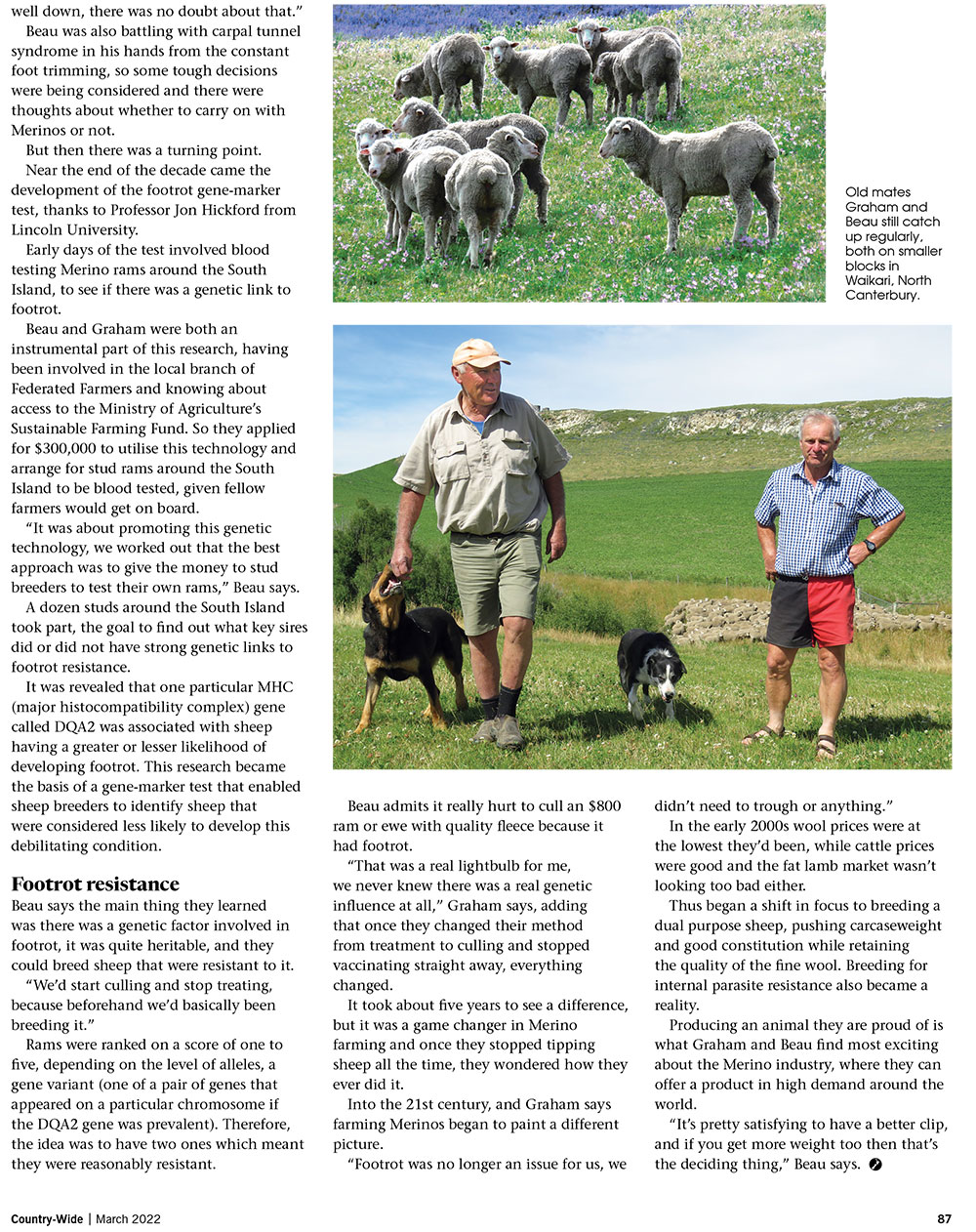