IT’S A LITTLE BIT OF THE SURVIVAL of the fittest in New Zealand when it comes to breeding cows. Kim Armstrong is an artificial breeding technician in North Canterbury for LIC, a transition from her vet nurse career which she began in her homeland of Scotland before venturing here six years ago. As the place where she grew up on a sheep and beef farm which later was converted to a dairy farm, and where she began her career, Kim has been very aware of the difference between breeding systems in the United Kingdom and NZ. One example Kim used was that NZ farmers might not spend or have the budget for vet expenses like caesareans, compared to the UK where it seems to be common.

“New Zealand farmers appear to have a more practical breeding system, compared to the UK where it’s about bigger and faster-growing carcases.”

Along with seasonal work such as teat sealing and disbudding, AI technician work means the busiest time of the year is upon her, being October to December which can extend into January. The 32-year-old says the key to her job is to respond as quickly as possible to each farmer with precision and speed to get on to the next farm and do it all over again. Speed is important with this job as the window for the heat is only 12-18 hours, every three weeks. As the herd is brought in from the paddock the farmer selects cows that appear to be more active, bulling, wrestling, showing discharge from the vulva, have riding marks, and some may even have small wounds on their pin or tail bones, hoof marks, mud or slobber on their sides. “These are all signs of a cow on heat.” Bad weather can make it difficult to identify any cows on heat due to their lack of movement in the paddock in cooler temperatures. Tail painting is a method farmers use, which Kim says works well as rubbed off paint is a sure sign.

“Some farmers will start with one colour of tail paint, then change the colour after I have inseminated the cow to see how many times she has cycled or been inseminated.”

Kim says some farmers with smaller herds will have their own banks of semen and do their own AI work, but a lot say it’s too much pressure and not fast enough. “There are plenty of opportunities if you miss a heat, however, it’s ideal to get the herd as close together as possible to reduce the amount of time calving.” Kim will AI hundreds of cows a day, and accuracy is vital. “A great deal of AI’ing is about placement, it has to be 100% accurate.”

Farmers register their cows on the LIC database, which has a range of bulls to choose from where they look through prices, type, weights and gestation periods. “I think New Zealand has a practical view on their breeding systems.” Outside of her AI technician role, Kim is back at her local vet clinic as a veterinary nurse three to five days a week. During autumn through to June, she is kept busy teat-sealing cows, she gets her ‘lull’ during June and July, then disbudding starts in August and takes her through to the AI season.

“September and October are busy too with pre-mating, metri-checking and calving. It all fits in quite nicely for me.”

Kim thoroughly enjoys the variation of her jobs throughout the year, which has been a natural progression from vet nursing. “I love it all, the practical, social and physical aspects. It’s quite rewarding.” It was when she was still in Scotland she began helping a friend with AI work in 2014. “I knew the money was pretty good and I could work in New Zealand with that skill. I was also really interested in genetics.” Hailing from southwest Scotland’s Wigtownshire in Galloway, Kim began her vet nurse career at the Academy Vet Centre in Stranraer, Galloway, in 2009.

In 2015 she came to NZ for what was initially a three-month trip, based in Gore, Southland, working as an AI assistant. This trip turned into 10 months travelling around most of the lower South Island then moving to North Canterbury where she worked as a vet nurse at Rangiora Vet Centre. In 2019 Kim spent four months back in Scotland for some family time and a lambing season, and looking back now, is so grateful. “I was so lucky to get back home pre- Covid to see family and friends. I’m not sure when I will see them again.” Coupled with her role as an AI assistant, she further developed an interest and in 2020 undertook her apprenticeship.

Apart from a couple of winter escapes, NZ has been her base ever since, and Oxford in North Canterbury is where she now calls home. Slotting into Kiwi life has been pretty straightforward for Kim. She competes and hunts her horse Zeus, thoroughly enjoys Kiwi people and culture, spends much of her spare time hiking and biking in the mountains, and is training for the Two Day Coast to Coast with her partner Joe.

“I like to keep fit and healthy, and enjoy a good social life too.” 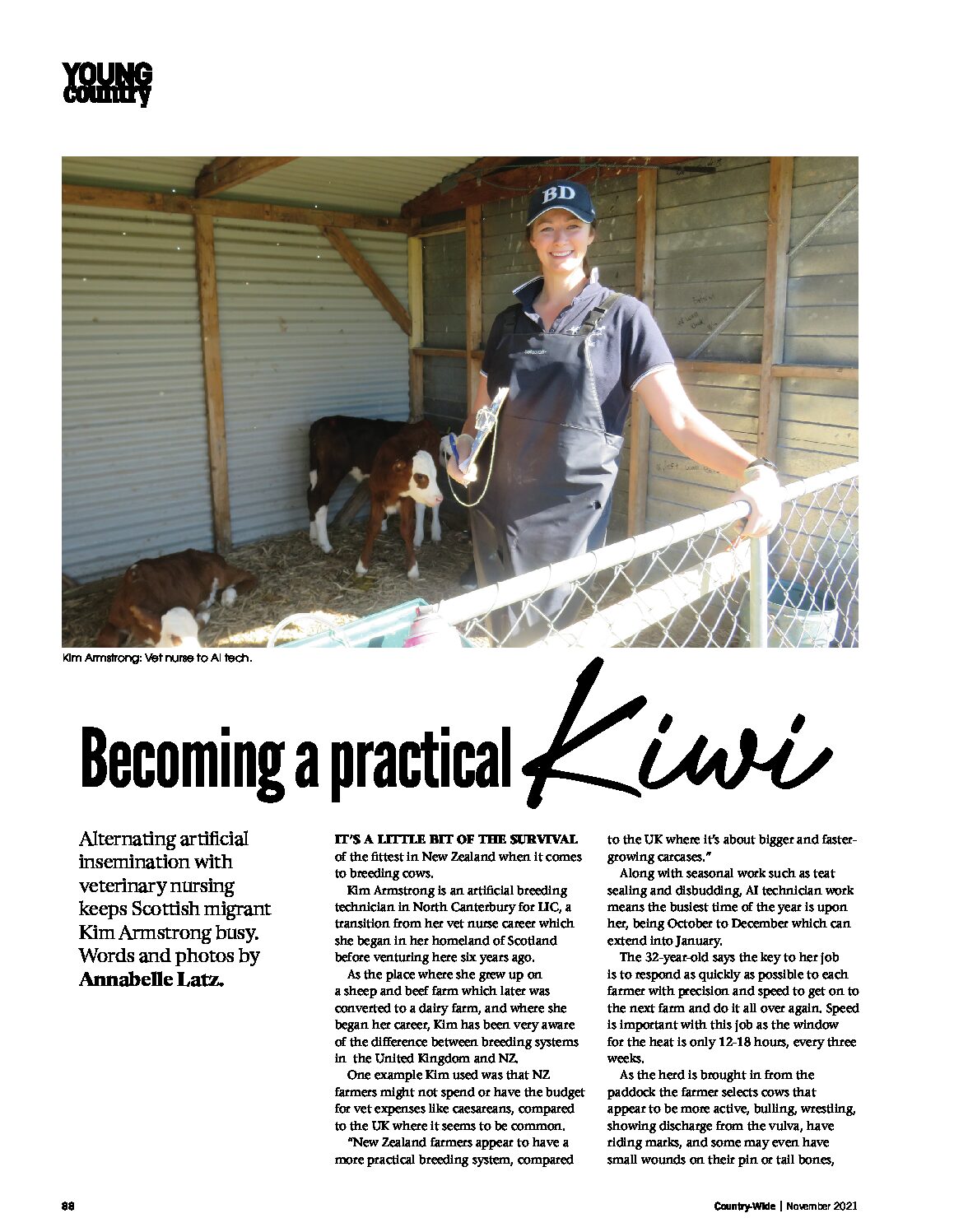 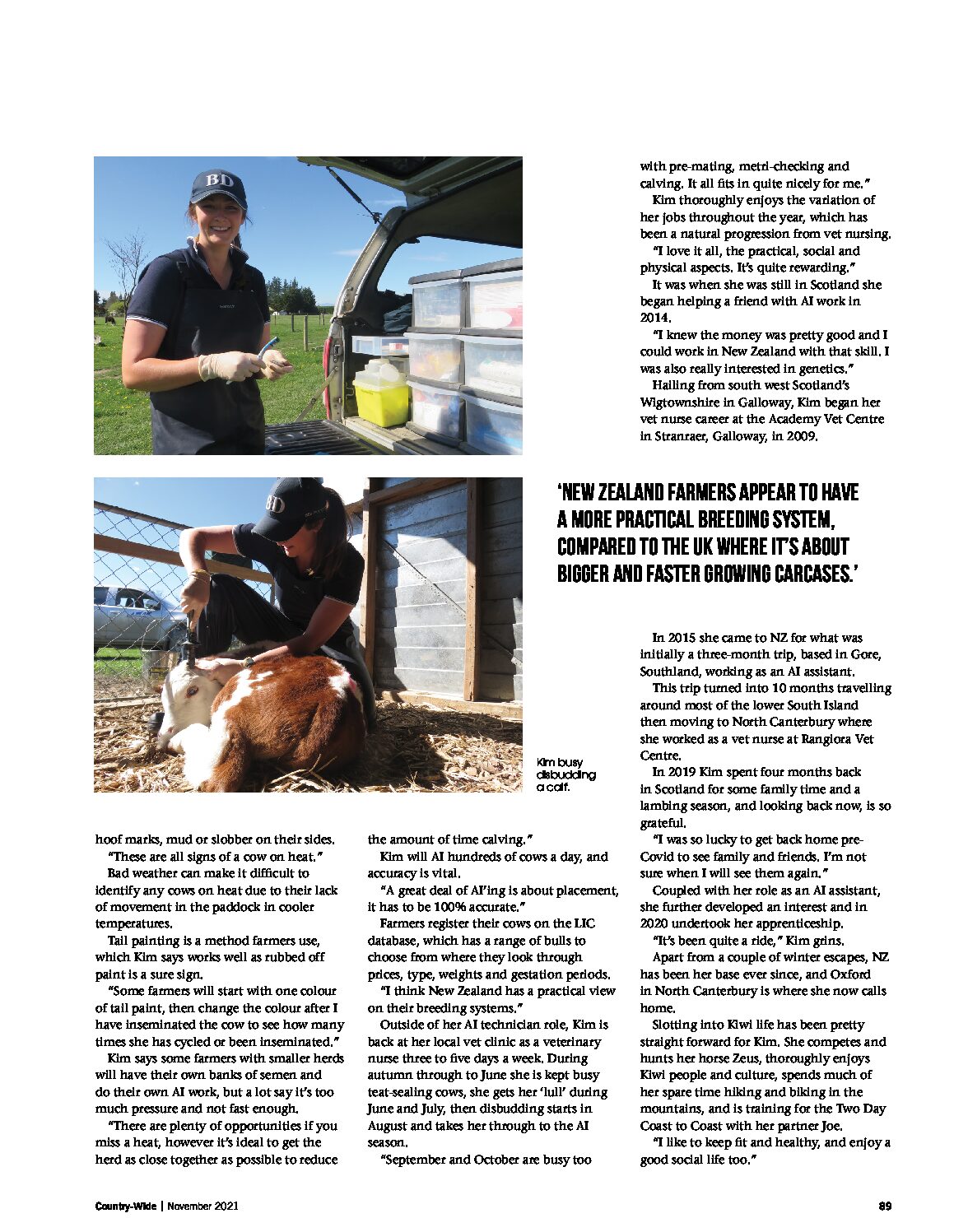