A North Canterbury dog trialist is the latest in three generations in the sport. Annabelle Latz reports.

Nicky Thompson uses her grandad Lou’s dog trialing stick, it’s a curly tea tree stick which once had a vine growing up it. Lou’s friend put a handle on it.

Born and raised on Northland’s East Coast at Mangawhai Heads, Nicky moved to the South Island 15 years ago, and now calls North Canterbury home. As an eight year-old Nicky was gifted her first Huntaway by her dad. Her name was Dice and everywhere Nicky went, she went. Dice was bred to Lou’s Huntaway which is where Nicky’s dad Roddy’s dog “Wag” came from.

“The first time I ever ran a dog was at Hobson just out of Dargaville, when I was about 16 years old with my heading bitch ‘Betty.’ After yarding my sheep it’s fair to say I was hooked on dog trials,” Nicky says.

Later that season she had her first open win at Papakura in the long head, followed by a third the following week, qualifying her for the South Island and New Zealand champs in Lowburn, Central Otago. Roddy was judging a Hunt event at Hobson and also ran his heading dog Kip in both Heading events.

“I remember grandad being there watching, he loved it. He’d ring up every week to see how we went, or read the results in the paper.”

Lou is 97 and lives with his wife Wylma near Bayleys Beach in Northland (appeared in Country-Wide May 2020). Nicky has always acknowledged the beauty of having three generations of dog trialists in the family, and loves the fact that grandad Lou is still out training his own pups. In fact, Lou has put his Heading bitch to one of Roddy’s dogs, the litter is due at Christmas, and Lou will keep one pup to train.

“Lou had a hip replacement a couple of years ago which helps keep him out and about on his 41-hectare coastal farm.”

In 2019 both Nicky and Roddy were competing at the New Zealand Champs in Kaikohe, so Lou and Wylma drove there for the day to see the action.

“Everyone always told me how awesome it was to have grandad around, and that he won’t be around forever. But I think he’s growing younger,” smiles Nicky, “he’s pretty special.”

Nicky has been judging for five years, seeing it as an opportunity to learn and “put a bit back into our sport.” She runs six dogs, and has Tommy Rocket, her Fox Terrier.

“The last couple of years have been really busy with work, securing a lease block and doing casual work in the North Canterbury area. The quality of my team has deteriorated which I find really frustrating but I’m really determined to get a nice capable team of dogs back…. Sentimental value got in the way, I kept some old dogs longer than I should have!”

Nicky’s standout dog to date was her Huntaway Base, who she broke in herself.

“At one stage I had three Open dogs, which was a good challenge. They were all so different to work so it was no walk in the park.”

Nicky has fond memories of her childhood amongst dogs and great people.

“I was a really homesick kid so was the old man’s shadow in school holidays and weekends, with my dog and pony.”

The South Island struck a chord with Nicky and in 2005, she landed herself a job at Nokomai Station in northern Southland. She says dog trialing is one of the few sports where it doesn’t matter whether you’re male, female, young or old. Although it’s not a team sport, you’re all friends at the end of the day.

“Dog trialing, it’s a great leveller. You can win one week and lose next week.”

Nicky’s message to fellow dog trialists is similar to that she’s learned from Lou.

“Get into it and give it all you’ve got. It’s like anything – the more time you put into your dogs the more you get out of them.” Lou says it’s great to see Nicky enjoying the sport so much, a seed that was sowed long ago.

Both Roddy and Nicky took a shine to the Huntaways early in their careers; Lou remembers Roddy always taking a Huntaway when he had to shift some sheep.

Roddy, a contract musterer, has recently moved back to Northland with his wife Janice. Lou enjoys watching him train his dogs, and has had many quality dogs in his career and been in many runoffs. Lou admits he would have liked to have done more dog trialing over the years, but work got in the way a fair bit, although he still spent plenty of time training dogs and competing in local Northland competitions.

“We couldn’t travel all over the country like they do now!” he laughs.

Lou is happy to pass his knowledge, which hasn’t changed much over the years.

“Get good pups, and make sure your dogs cast well and fall nice – aim for 12 o’clock. And don’t use erratic dogs, make sure they go up around the top, and not too close.”

Roddy never really got into dog trialing until his late twenties, but started training dogs in his teens on the farm Lou was working at on the Pouto Peninsula. The Zig Zag and Straight Hunt are his judging areas for dog trialing, and he agrees with Lou he’s always been about Huntaways. Dog trailing is all the better for having Nicky there alongside him.

“Right from when she was a kid, all she wanted was a dog and a horse.”

His 32 years of judging under his belt has created wonderful memories. “In some places you get way out into the boon docks in the back of Taranaki, and you get there and there is a fantastic community.”

Roddy has a team of six dogs, three of which he competes with; two Huntaways Tone and Doug, and a heading dog Bruce. He’s lining up his first competition at the end of January, and hopefully then down to Greenvale in Southland for Nationals. He’s in awe of his dad who’s still training dogs.

“That’s the beauty of it, there’s no danger in it. I hope I’ll still be training them when I’m 97. I just say develop the strong points of your dog, and the weak points will look after themselves.”

“I remember grandad being there watching, he loved it. He’d ring up every week to see how we went, or read the results in the paper.” 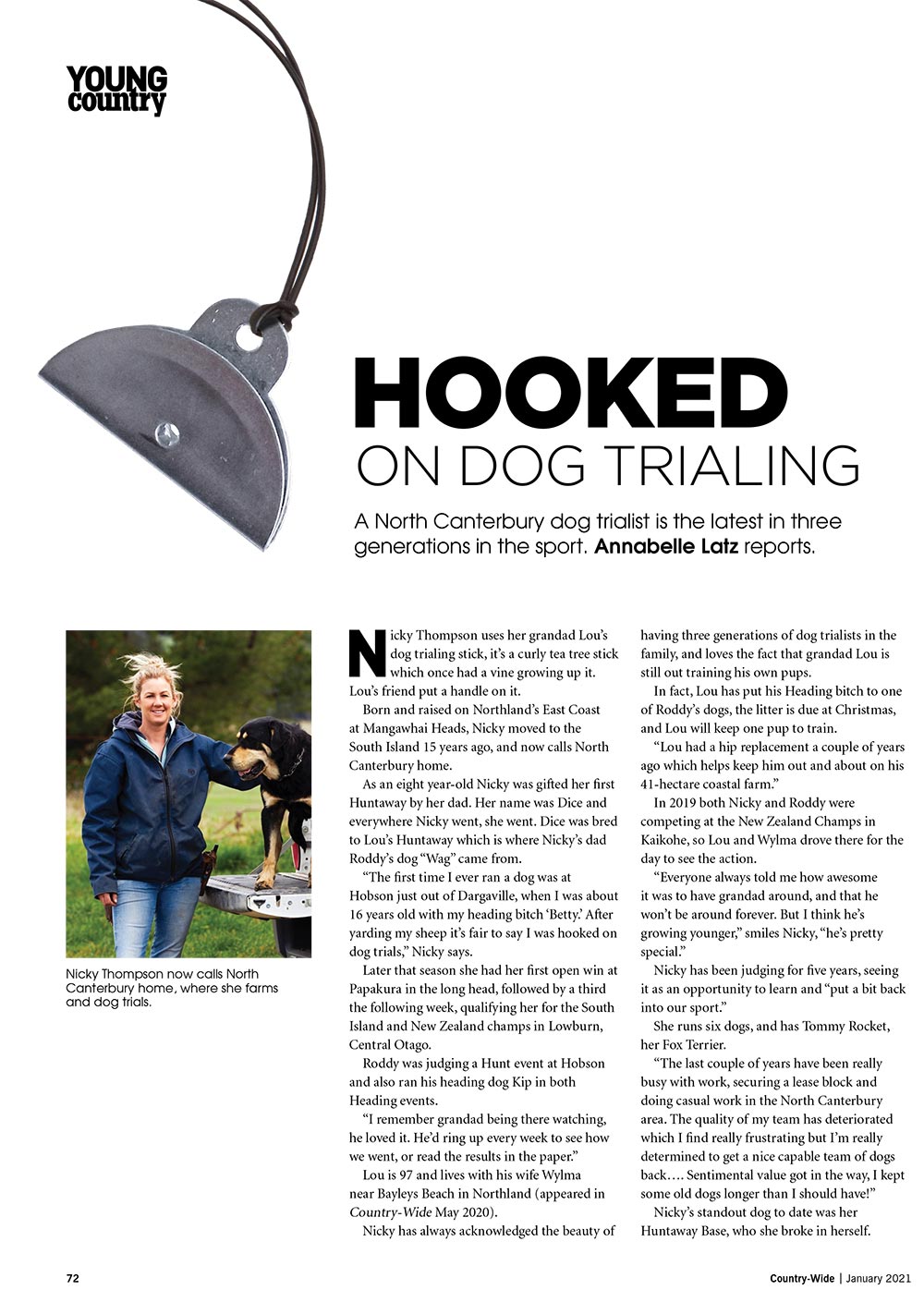 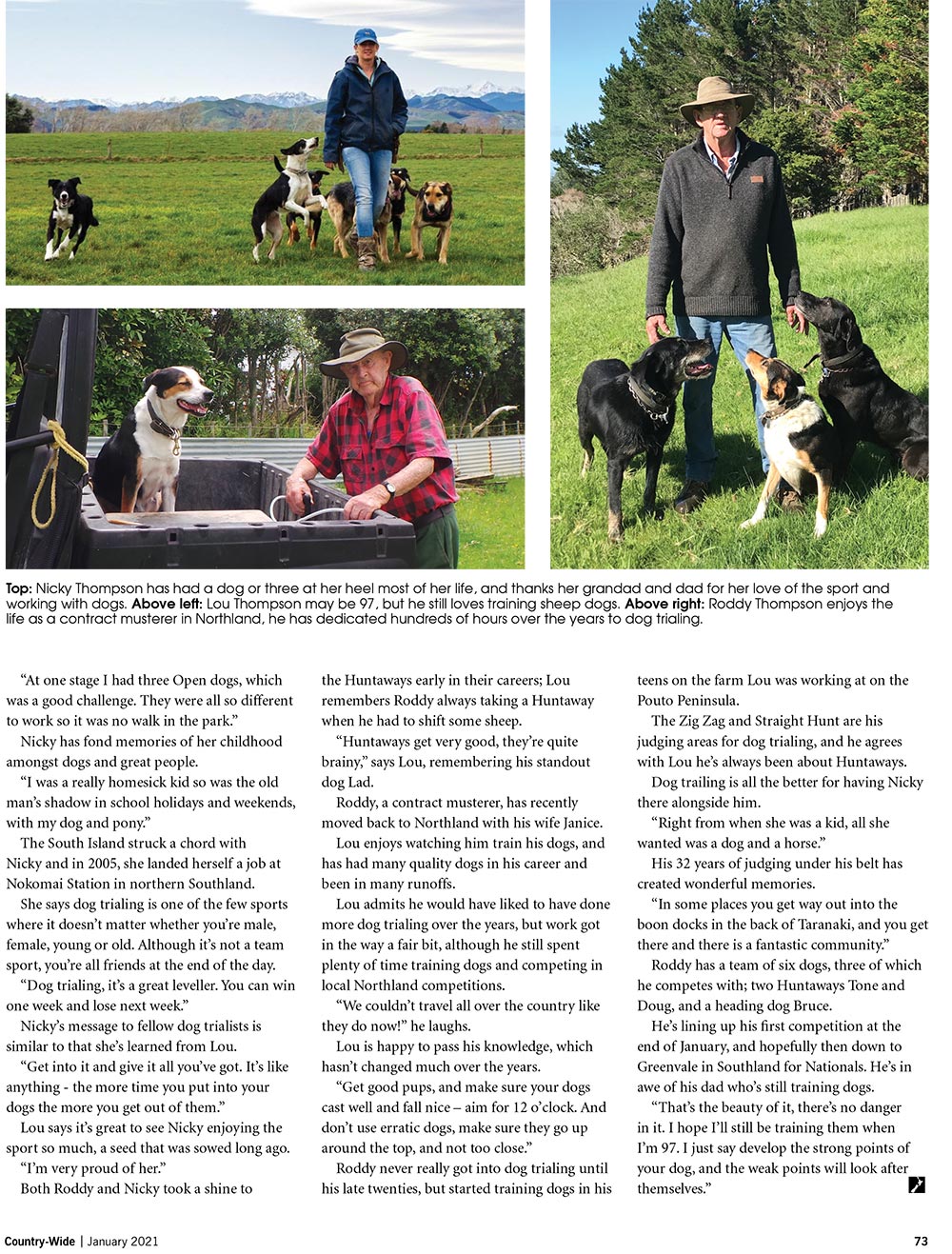