It was mid June 2020, sleet was falling, and Billy Dowle looked out the window from his cottage in Scargill, North Canterbury to see his mainstay Huntaway, Earl, sleeping in his dugout next to his kennel, rather than on the hard wooden floor. Earl obviously needed a new bed. Billy and his partner Annabelle Chilwell headed out to buy him a new bed, but were disappointed to only find expensive synthetic ones, and nothing offering them a natural product. “So I decided to make one myself,” Annabelle says, who grew up around wool and sewing machines as her mother had a woollen clothing business in Boyup Brook, Western Australia.

Before long, they’d headed down the path of researching canvas and wool-fills. It was a bit of a case of trials and tribulations to find the right canvas, to ensure it was one that did not create condensation inside the kennel. In a matter of weeks, the team of working dogs Pip, Nui, Earl, Floss, Gin and Squirt all had their own canvas wool-filled beds, and loved them. Both Billy and Annabelle were casual farm workers in North Canterbury, and were moving to Benmore Station in the MacKenzie Basin where Billy was taking the position as stock manager.

They’re now the proud owners of dog bed and dog coat company, Natural Hound. Launched in December 2020, the first couple of months of production have been scary, busy, full of lessons, and most of all, exciting. “We’ve had a lot of support from farmers which has been really cool,” Annabelle said. Billy said gaining confidence in what they do has been a major factor. Early days saw them questioning whether to buy three metres of canvas to test a few out, now they’re looking at bulk orders. After buying the first canvas he had 10 cents left in his bank account. He said to Annabelle, “We are really going to have to make this work!” The first few orders were from friends, and they still remember the buzz they got from the first website order received in mid-December. The word about Natural Hound has mainly been spread through social media, and they’ve been rolling out 10-20 beds a week ever since. This keeps Annabelle busy as she’s a part-time casual farmhand and part-time dog bed manufacturer. She cuts the canvas in Scargill and sends the items to Christchurch to be sewn. These are returned to her and she fills them with a wool-polyester blend. “The little bit of polyester in the inner enables the bed to maintain its loft and stops the wool from compacting. It also makes the beds a bit lighter to move. We’re looking at natural alternatives for this, like bamboo and hemp.”

The market is mainly around the South Island at the moment, although they would like to look into the North Island, and eventually Australia and the US.

The other part of their business is the woollen felted and canvas dog coats, which they launched at the local A&P Shows in March and April around Canterbury. Annabelle sewed these herself. Beds range in price depending if they come filled or not; $90-$120 or $110-$160. The coats will range from $75-$85. They offer a 15% discount when buying three or more. They didn’t share their cost of production but did say if they put them into retail stores they would have to up their price by 100%.

Billy said it was a great feeling to be supporting the strong wool industry, because it’s a quality resource that has so many uses. He remembers about a month ago when a farmer placed an order for one bed for his bitch who’d just had a litter of pups. He contacted them soon again afterwards to ask for a bulk order. “That to me is saying a lot. If you get your dog a bed and they really love them, you know you’re onto something.” Animal welfare is becoming a big thing on farms and nearly gone are the days where work dogs live in cold drafty kennels. Farmers are also starting to realise the long term benefits of dog health by looking after them. “Products don’t need to be a designer label made from wool adding to the price tag. Our products are locally made and filled/lined with New Zealand strong wool and we still manage to be price competitive against synthetic products and maintain a high NZ quality standard.” With autumn around the corner and the air temperatures soon to drop, they’re both looking forward to launching the coats. “It all goes back to that moment when we said to each other ‘Are we going to do this?’ And we’re so pleased we did,” said Billy. • 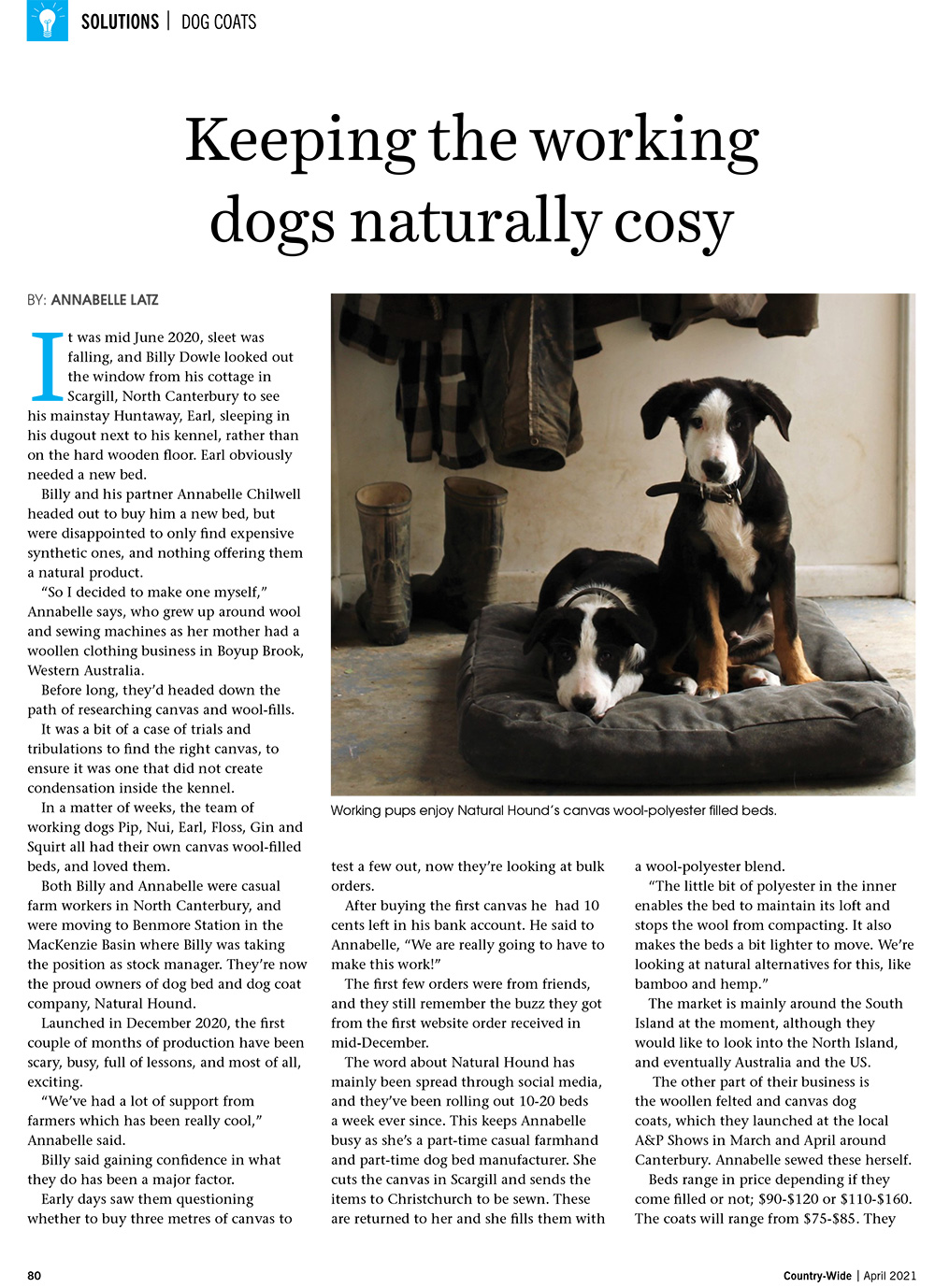