IT WAS FRIDAY JULY 16 WHEN Hayley Pitts of Mount Gladstone up the Awatere Valley in Marlborough was at the Howl of a Protest in Blenheim. She knew the weather was turning so as the afternoon rolled on, she decided to head home. Just as well, because if she’d waited much longer she might not have seen the farm for a few days.

“The Awatere River was horrendous, you couldn’t get anywhere and even the little creeks were massive,” Hayley says. It started raining on Friday night and Awatere Valley Road was washed out before sunrise on Saturday. Weather warnings had allowed them the chance to move stock to higher ground, but they never quite expected what was delivered.

“We were thinking it will never happen. But 140 millimetres fell in that first big rain, that was massive.”

Waking up on Saturday, admittedly not getting much sleep as the rain fell hard on the roof, the road and river levels were the worst they’d ever seen, with many holes and slips and damaged culverts. About 20m of road had been washed away, and as soon as conditions allowed they dozed a track around the side of a hill. “We could get through, but it certainly wasn’t State Highway 1,” says her husband Jeremy. A mob of 1200 hoggets needed shifting from the flooded vineyards up the valley to the home block. The 12km trek from where the damaged road allowed stock trucks to reach them taking about five hours, including navigating one big hole in the road, crossing the Hodder Bridge and going past diggers and trucks. Reluctance was obvious, so out came the mob of pet lambs with their son Harry (13), and the Merino hoggets led the way for the skeptical mob. “It was pretty good having the lead lambs, it was very cute too. They’ve certainly earned their bag of pellets,” says Hayley. The weather was still not on their side even at shearing time, so they borrowed the neighbours’ woolshed at Glenlee, which meant having to cross a second big bridge. Once again, Harry used his pets to make this possible. The rain damage may well have been increased by the dry summer and very dry autumn this year, leaving the Pitts family an extensive list of repair jobs. This included a few smashed floodgates that needed fixing or replacing, and plenty of track repair work.

“But on the whole, we came out pretty good. It was school holidays so we put the kids to work, probably not the adventure they had planned,” says Jeremy.

An added stress was accessing sheep they had grazing in a vineyard on the Wairau Bar on the north-eastern side of Blenheim, and were very grateful for the help they received. “Our staff and Wairau Bar locals were a huge help in the clean-up and rescue of the sheep in the flooded vineyard,” says Hayley. It was a similar but two-storm tale of damage for farmers Ross Bowmar and Jess Ensor who live at Redcliffs Station on the south bank of the Rakaia Gorge. On Friday May 28 the rain started to fall. The biggest deluge of 174mm fell between Saturday evening and Sunday evening, with a grand total of 264mm recorded at the house by Monday. It added up to the biggest flood on record. Out the back of the 1935ha farm, creeks were more like rivers. They knew bad weather was on its way, so had stock in position as best they could. But Redcliffs Bridge that runs through the middle of the property was completely buried by shingle, making it impossible to reach some stock and shift break fences, which Ross admits was very stressful.

“We couldn’t feed them, we had to use choppers to fly motorbikes over,” he says, adding that the Merinos were in a state of shock, and struggled to eat any food for about 10 days despite it being put in front of them.

Their condition was knocked back quite significantly and in October they were still a bit lighter than they’d normally be. “As my father-in-law (Willy Ensor) said, it’s not the year to be criticising people for their stock condition.”

Ross said this storm was just “one of those things that has never happened before” and a buried bridge was certainly never part of their farm management plan.

It took a week or so to get the bridge open again, thanks to the work of a good local contractor and the district council. In mid July when the second storm hit, TB testing had just started and the bridge was buried again, only taking 12 hours of rain for the shingle to do its damage this time because conditions were still wet from May. It was another four days before this could be opened again, a major access point for all supplies to the farm.

“Back in 1983 when it was built it was root raked for four to five metres of clearance. Now it’s back to one metre.”

In the May storm, their hydropower system built in 1983 was also buried and destroyed when the pen stock pipe was knocked out of alignment and buried under six metres of shingle. They could see the rain on its way, so sealed the pipe at the top, but it was buried by material backing up from the bridge which acted like a dam. Before fixing it, they were in the process of moving the hydro shed to a less flood-prone area, when they received another 156mm in the flood in July. “We had just dug everything out, then it all got buried again.” Ross says for that reason, the July flood was almost harder, even though it wasn’t as severe. “After the May flood, we carried on ourselves, but the July flood was harder to handle. Who would have thought it would happen again.”

The new hydro pipes are polyethylene, and buried deeper than the original 2.4m concrete pipes. At the beginning of October it was almost ready to go, which was a relief, after living off a diesel generator since the first storm with a running cost of $100/ day. Repair work also included fixing turbines, intake structures and investing in underground power lines in places. Fixing fences and flood gates was also a massive job, as was clearing the creek that got into the silage pit. Creating a resilient operation to future proof for flood events is top of mind, spending a bit more now to help down the track. “It’s not this never-ending list. I know the rebuild will come to an end, it may take us a year, but it is not forever…we’ve just got to chip away, that’s all we can do.”

They brought in extra labour, some thanks to local Facebook pages and job seekers relocating due to Covid-19. This helped significantly, as did the assistance from the local Federated Farmers, Rural Support Trust and Flood Recovery group.

“Every farmer has a ‘to-do’ list, but then it becomes extraordinarily big. It’s good to get it out on a bit of paper so it all becomes more digestible.” 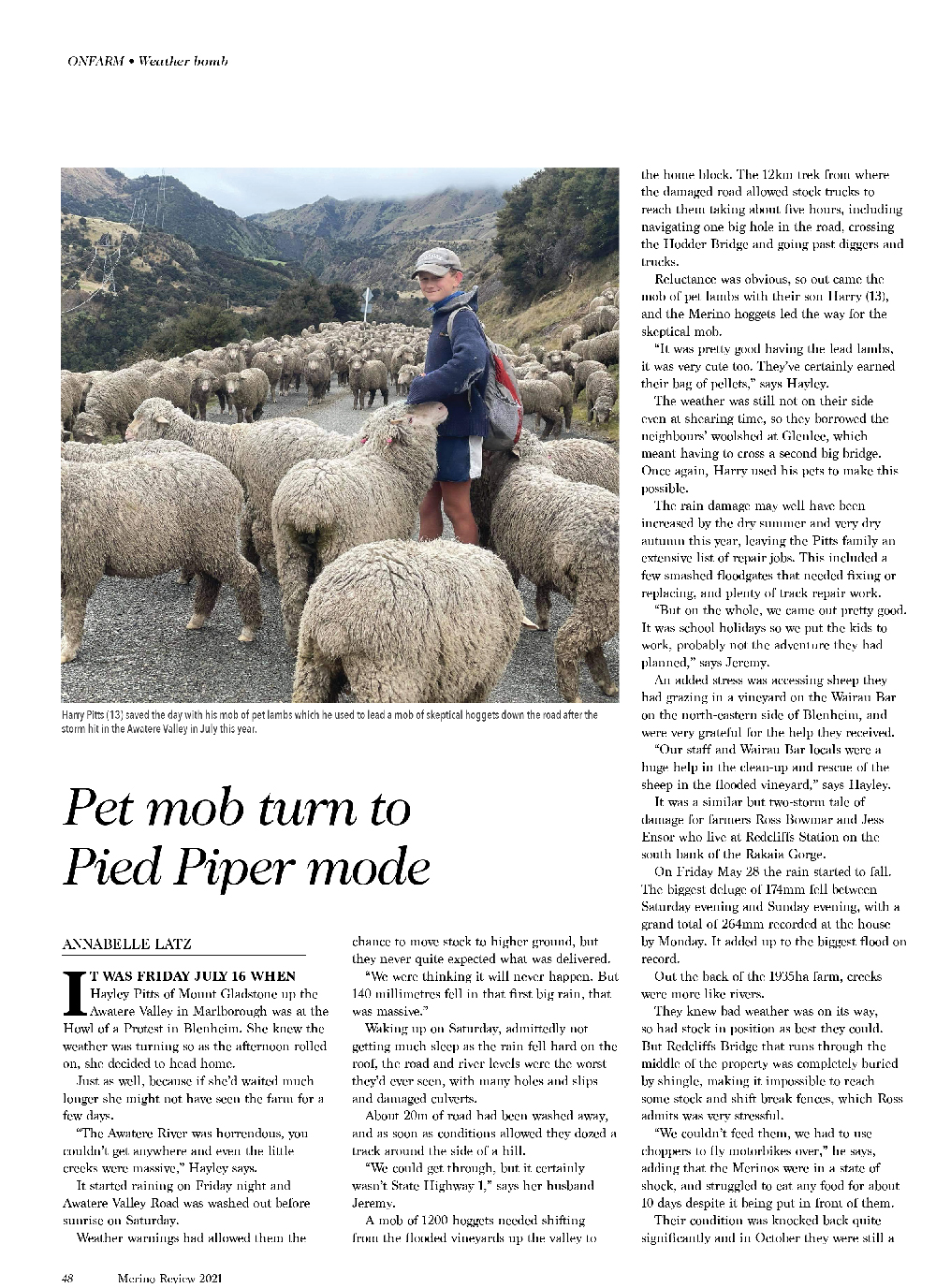 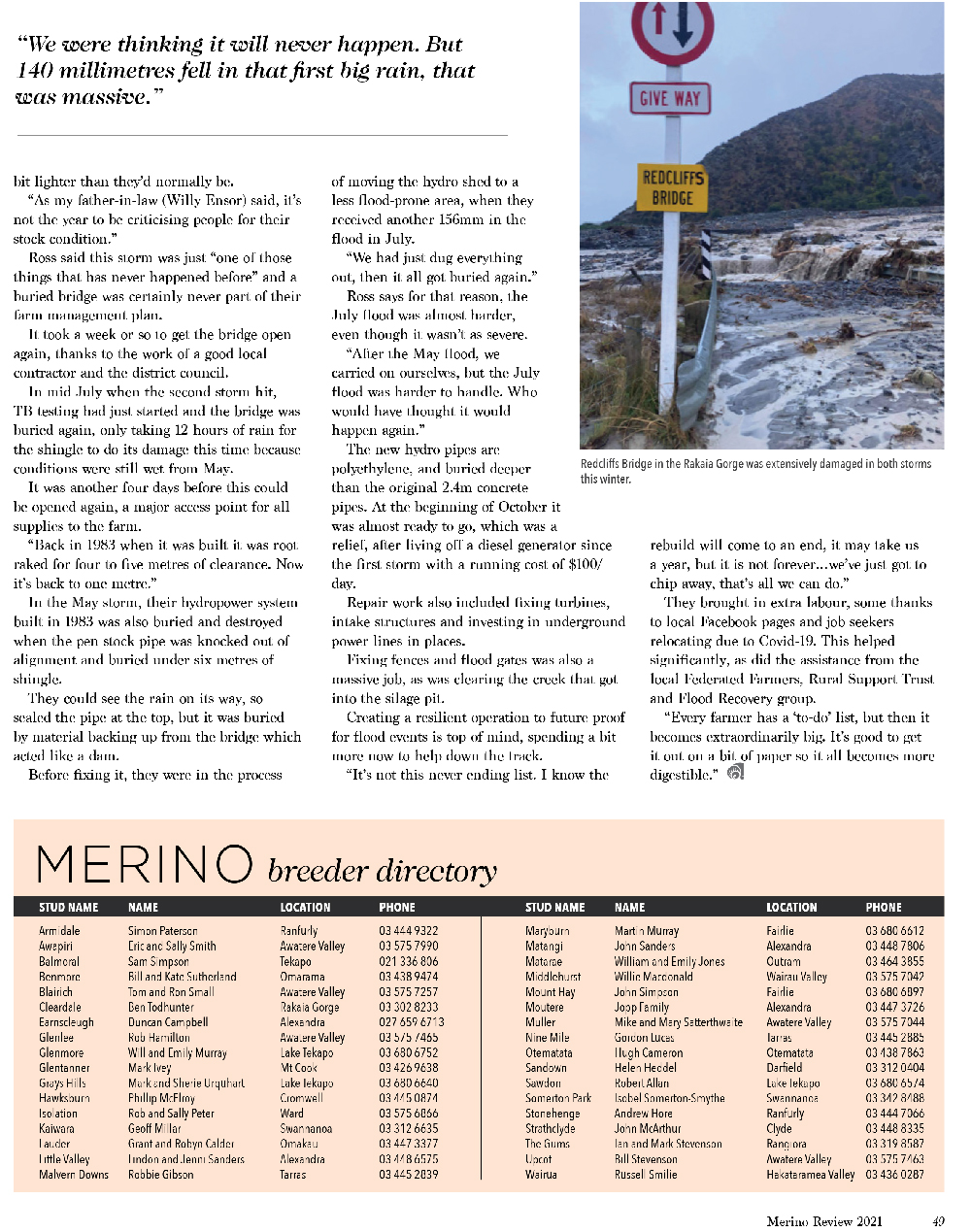