Pushing for what he believed in, New Zealand

Farmers used to lose entire herds to TB in New Zealand. This is one recollection Rob Corboy has of his 47 year career in the TB game. He has recently hung up his syringe, and has plenty of stories to tell. From his extensive work with vector surveying to giving tips on how to catch ferrets, life has always been interesting. Originally from Nelson, Rob cut his teeth with the Department of Agriculture on the Brucellosis scheme in 1974. Later that year he trained as a TB technician, qualifying in early 1975. He was transferred to Westport, where TB was what Rob described as “rife.”

There were 120 infected farms in the Buller and Inangahua districts at the time. From then and into the 1980s, TB technicians used to test herds three to four times a year, and in the early 1980’s freezing works would not accept TB reactors. “So we’d slaughter them ourselves. We did a lot of slaughtering, and we got pretty good at it.” The TB testing scheme used to be Government owned. Once it was discovered that possums carried TB, the Ministry of Agriculture and Fisheries (MAF) employed the New Zealand forestry service to kill all possums throughout the country. “We had five three-man teams in Westport, and five three-man teams in Reefton.” Their job involved laying poison bait, night shooting and trapping. “And it worked. By the early 1980s there were less than 10 infected herds in the Buller and Inangahua.”

It was in 1967 when a sick possum was found on a badly infected farm in Mokihinui on the South Island’s West Coast. Before that no one had really known how TB had spread to the cattle. The Government pulled the funding when numbers got low, thinking they’d “won the battle.” The numbers subsequently went through the roof again, at which time the Biosecurity Act of 1993 was set up, removing funding responsibility from the Government. Described as a ‘turning point’ by Rob, the Act changed TB control to an industry scheme, and TB was seen as a pest rather than a disease. When the Act was first set up, the control agency for TB control, the Animal Health Board, was very understaffed, so numbers rose again, in fact higher than they’d ever been, with 1800 infected herds nationally by end of the 1990’s. Thanks to the ambitious goals of the Animal Health Board, today less than 20 herds across New Zealand are infected. Despite his near 50 year career, Rob has only worked for one company which has gone under different names. After the Ministry of Agriculture and Fisheries became MAF Quality Management it was then split into two State Owned Enterprises – Agriquality and Asure, which merged 14 years ago to become what is now known as AsureQuality. Rob once read in an old report written by the Department of Agriculture, that TB has been known in New Zealand since 1898, in Banks Peninsula when dairy farming was big over there.

The antigen for TB testing was first used in the late 1950s, and all town supply dairy farms were initially tested. “Just prior to the use of the antigen, the stock inspector would run the stock through the yards. If a cow coughed, it was deemed to have TB and was slaughtered.” Rob’s job has seen significant changes. Paper to electronic systems being one, modifications to the test, TB testing deer as well as cattle to name a few. The short thermal retest finished in 1974 just as he started. “This was archaic. There was four millilitres of the TB antigen injected into the cow, (now it’s one tenth of a millilitre). They’d measure temperatures every two hours for a 10 hour period to see if the animal had TB.” In the late 1970s, the Comparative Cervical test was used as a retest. Two sites on the neck were clipped, one with a tenth of a millilitre of bovine TB antigen, one with a tenth of a millilitre of avian TB antigen.

“You can’t see avian TB, so we’d be able to see which if the bovine strain was present. ” TB is a family of mycobacterium, including the bovine, human and avian strains. Rob moved to Rangiora, North Canterbury in March 1990 after 15 years in Westport, along with his feral animal expertise. Possum surveying was a big part of his job, and in 1992 a TB infected ferret was found in the Mackenzie country, just after the 1992 snows.

“We then started talking about vector control, not possum control. In fact, up to 25% of the ferrets initially had TB, compared to 1:1000 possums.”

“I had to push for what I believed in.”

He was training farmers how to catch ferrets, they would ring him up and ask them to be tested. In response Rob set up two freezers in North Canterbury where farmers would drop them off for autopsy. “To catch a ferret you need to find a meat source, rabbit colonies works best. I’d tell the farmer not to put the trap off the track, because ferrets are lazy.” Rob created a feral animal TB database, which later proved to be very valuable for applying for funding for TB control. “It’s something I’m really pleased I did.” There were 50 farmer-run pest control groups in North Canterbury, Local Initiated Programmes with materials funded by the Animal Health Board. Agriquality staff including Rob were independent facilitators. What followed was extensive ferret and possum control work and a large number vector surveys throughout Canterbury. The idea was to “get in front of the TB, rather than chase it.”

That was part of the success story, and those North Canterbury pockets of TB infected pests never crossed to the south side of the Waimakariri River. Rob said Vector surveys, combining using TB testing, vector control and animal movement control, accountability for vector control through monitoring, and the use of 1080 (which Rob admits is very controversial) all contribute to the low number of TB cases in NZ now. He moved into management roles in early 2000s, at one point, managing all the field staff in the top half of South Island including Canterbury. A biosecurity manager and trainer as well as a TB trainer, auditor, animal welfare inspector, Rob’s career has been varied.

“I can even take blood from alpacas, which isn’t easy.”

Working with wildlife has been a major part of his career, and one he is passionate about.

“A lot of things we know now, is because of that (wildlife) research.”

The role of female TB technicians has increased a lot, and he has no doubt he is handing the reins over to safe hands when Oxford based TB technician Mel Brooker takes over his role as TB technician trainer and assessor. 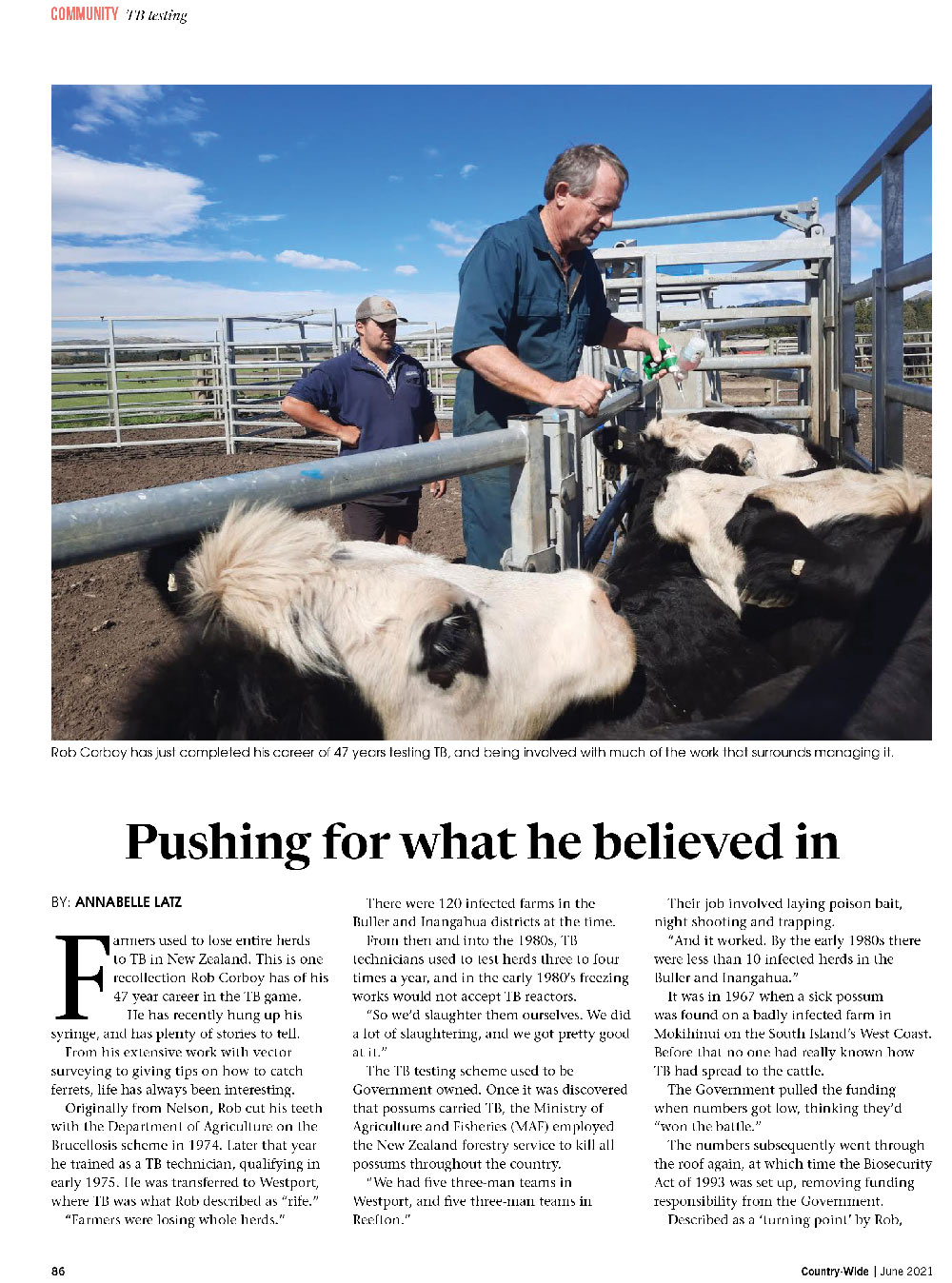 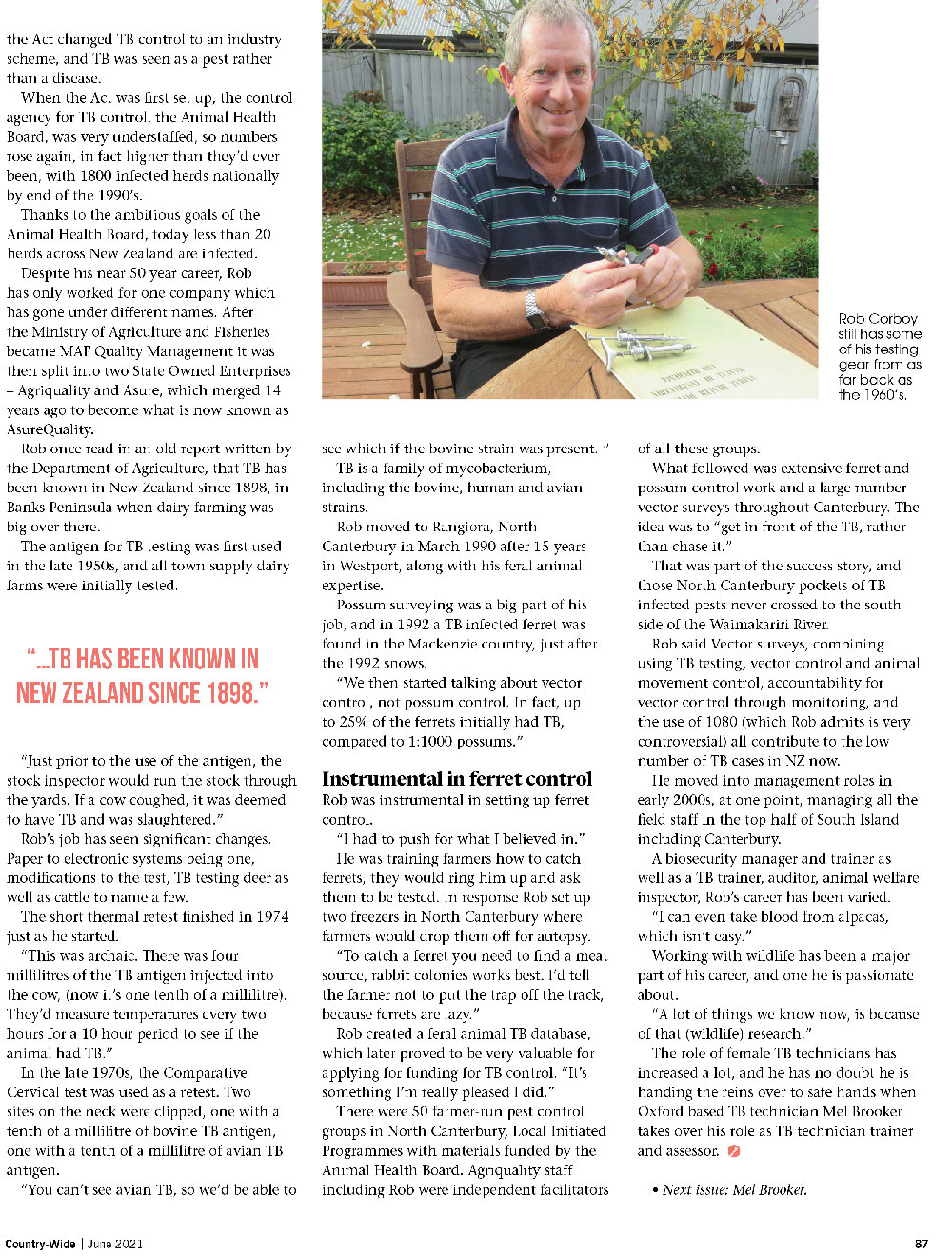