Running for their future, New Zealand

The love for the rural sector will always be there for Ben O’Carroll and George Black. These two youngsters know its path can be varied and challenging, demanding mental toughness. This skill is sharpened by tying up their running shoe laces and hitting the road. Last November Ben, 30, who grew up in Waikari in North Canterbury, ran 111km from the Trust Hotel in Cheviot to the Carlton Hotel in Christchurch, raising $25,274 for Movember Foundation. Last June George, 25, who grew up just down the road on a sheep and beef (now dairy) farm in Culverden, ran 100km in his gumboots from The Peaks in Hawarden to Deans Avenue Christchurch, raising $20,655 for the North Canterbury Rural Support Trust. Their efforts left a huge feeling of gratitude and satisfaction.

“It’s all about the mental toughness, the waves you go through, and coming out the other side,” George says. After high school, Ben headed to Lincoln University completing a Diploma in Agriculture. He cut his teeth shepherding at Matukituki Station near Wanaka, with an old huntaway bitch and a two-year old heading dog.

The opportunity to start a scanning business arose when he was 23. “I thought about the money that could be made, and the potential of farm ownership through that,” Ben says. Omihi-based now, BocScan Ultrasound keeps him busy for part of the year, the remaining months spent tailing and crutching for Clean Crutch Contracting all over North Canterbury, Central Otago and Southland, and Southern Sheep Services in Gore. He says farming has so many regulations these days and the price of farms is so high, making it harder or impossible for youngsters to get into ownership.

“Hard graft, business ownership and farm management positions all help, and there’s more families helping younger ones getting into farming, because it’s nearly impossible to do it by yourself.”

Ben enjoys the physical and mental demands of owning his own business, admitting he’s learned a lot in the past eight years. “At 23 I was clueless and didn’t know what I was doing, it was with the help of family members and dad that I got through the early years.” Accuracy is vital because he’s providing farmers with data that will dictate a major part of their annual income. “Lambing percentage wise, this is improving all the time, farmers are investing in getting good feed into their ewes.” To keep on top of things mentally, Ben started running about last April, swapping it for the beers.

“I’ve really enjoyed the mental toughness side of it, getting home from work and putting on my running shoes. It’s made me feel good about myself.”

Movember was approaching, so on November 1 he dedicated the 111km run to this cause. Having dealt with a patch of mental health issues, Ben saw this run as therapy and a way to help others. “I’d been running 50-60km per week, but I’d always wanted to get into ultra distances. I thought it might take a couple of years though.” He admitted people would think he was mad for trying that. “I knew I was mentally tough, I just hoped my body would hold up.” Ben knew he had to start slow, enjoy the good moments, and embrace the tough parts. He was very happy with his run, completing the 111km in a shade over 13 hours. He had company throughout, including George for the second half which was much appreciated when Ben had to dig deep running the final section into Christchurch.

“I got pretty emotional at times and some parts were really tough, but it was incredible and I was on a massive high afterwards.”

Ben has been thanked and congratulated by strangers and friends, many telling him running has helped their motivation and mental health too. “It’s a really amazing feeling to make a difference like that, I feel like a better person for doing it.” George enjoyed being carefree running around on the farm as a kid, but near the end of high school decided to swap the text books for a rasp and toe clips, learning the trade of a farrier. He shod horses for four years which he thoroughly enjoyed, both the precision of the job and the people interaction. During that time his parents bought a 650-hectare farm in Pyramid Valley where they farm beef, dairy cross, and grow grain, to complement the 220ha farm in Culverden where they are now in their ninth year of dairy farming. George’s older brother Ben was the driving force behind the conversion.

The complete in-house farming system ethos excited George, and he saw an opportunity to also be involved, so he bade farewell to shoeing horses and took to the farm.

“That was really cool, I did a fair bit of fencing and development on it when we first moved on, which required precision just like the shoeing.”

They took the farm over in February 2016 and the three-year drought broke a month later in March. Its main use is winter grazing the dairy herd from Culverden and growing out the dairy replacements. They also grow grain and use it as a support block to finish a few beef cross animals out of the dairy herd, and cut and carry feed to the dairy farm. George enjoyed the stock work and the satisfaction of producing well fed animals, but knew he had to make a break financially to set himself up for the future. “I wanted to do my own thing, see how far I could go.”

Almost a year ago George saw an opportunity to move into real estate, joining up with Bayleys in Rangiora.

The money side of things was appealing, to save for a farm in the future and allowing financial freedom now. “I liked the idea of having pressure put on me. It’s challenging, it’s a mental game.” He said similarities with farming include the seven- day-a-week expectation. “It’s sink and swim stuff, there is no fall back.”

Buying and selling in the residential and lifestyle market, George says the people side of things is really enjoyable, as well as networking and learning about another side of the rural sector. “The aim of our Pyramid Valley farm was to be self-sufficient and to cut out agents clipping the ticket buying and selling stock and feed for the dairy farm, so it’s ironic I have become a commission-based agent myself.” He admits the farming ladder is tough, he’s seen a few mates getting into farm ownership through family, but buying one takes some thinking outside of the box.

“Corporate farming is making it harder, and the carbon thing is driving the big farm sales.”

Running has always been a good time for head space for George, who’s run a couple of marathons and appreciates the confidence it gives him to keep pushing through, getting the bad patches and having to carry on. The Rural Support Trust was a group he wanted to support in his gumboot run, particularly after the drought that hit North Canterbury hard in 2021. “It was an awesome thing to do. That level of satisfaction was massive, I was on a high for about three days.”

His footwear of choice worked a treat, and certainly didn’t hold him up. With just a couple of early stomach issues that sorted themselves out, George reached Deans Ave in just over 12 hours. He simply told himself there was no way he was not going to complete it.

“I had a couple of blisters, but they went really well and yes I’m still using them!” He wasn’t expecting the run to relate as well to life as it did, and he was humbled by how much people’s response resonated with his effort. “I think people like the idea that you’ve run 100km. He says a lot of people think they can’t do it, but they can. Ben and George are both looking forward to the next big run, perhaps lifting the distance to 100 miles.

“I’d run 160km in gumboots, but 200km might be stretching it… you’d be asking for trouble wouldn’t you?” George says. 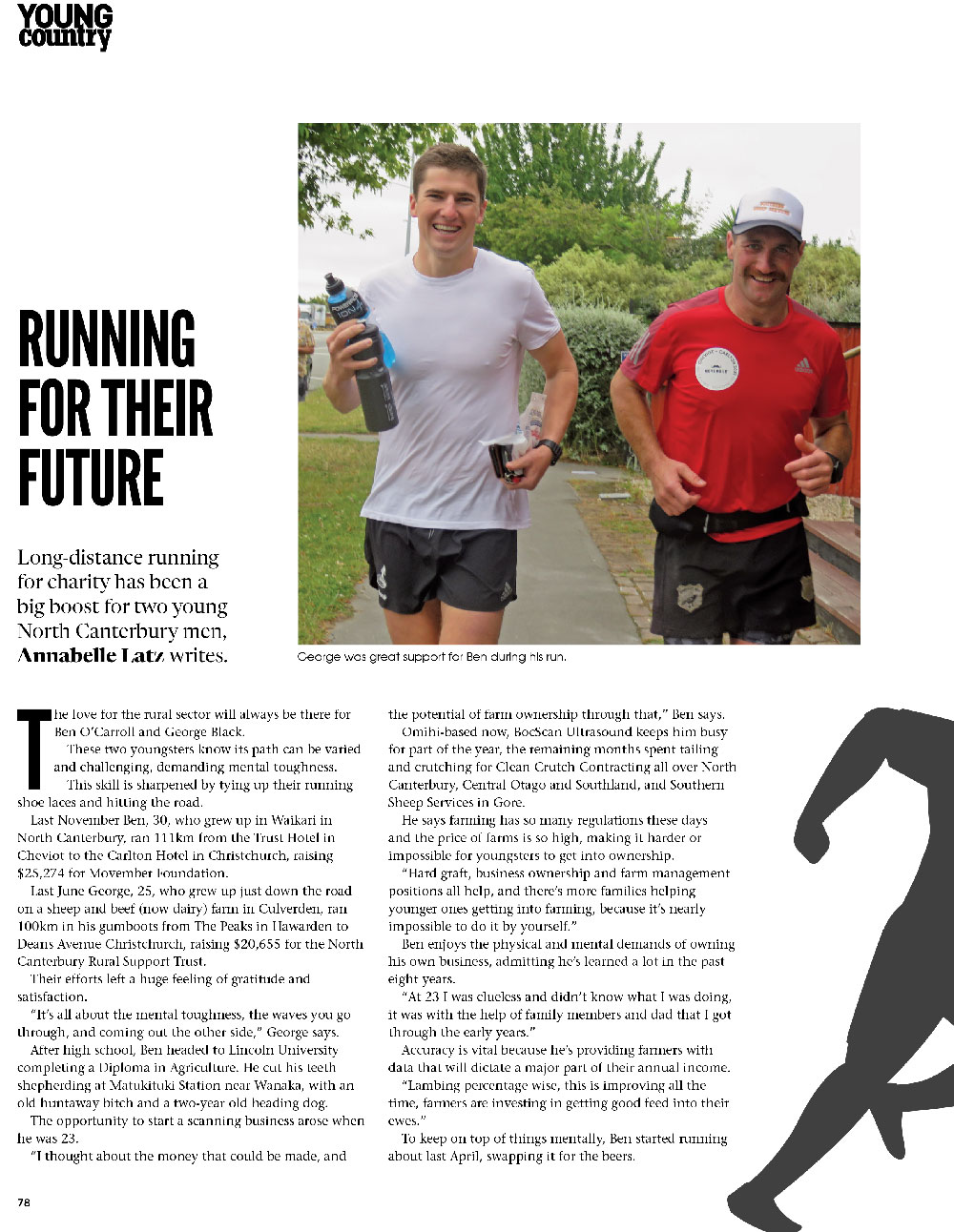