Marketing, targets and research is what the New Zealand strong wool industry needs for it to become the fibre of choice, rather than synthetics.

Rick Orr of Red Oak Stud says this has been the industry’s downfall.

“The biggest problem is that we do nothing to add value to the strong wool industry. We don’t process anything here. Wool factories are closing down, but we need to make more products here.”

Red Oak Stud has been in the Orr family since 1923, and Rick and his wife Deb have been farming Romneys since 1989.

This Romney ram breeding venture began in Wanganui, where they would sell up to 400 rams a year.

During the 1990s, together with a group of clients, they would send hundreds of bales of wool to Hunters in Scotland for tweed jackets and other strong wool products.

“We were getting a good premium.”

At the time they were undertaking plenty of wool research through PGG and WRONZ.

“We learned that the highest bulk with the lowest variation was the best option for carpet.”

During these times there were 72 million sheep running around NZ, the United States carpet market used one percent NZ half bred wool.

“If they had used 2%, New Zealand would not have been able to produce enough.”

In 2001 The Orr family moved the stud down to Weka Pass in North Canterbury, where they run a 2100-hectare Romney and Angus stud with their son Ash.

Rick says the North Canterbury dry summers are restrictive on performance, and there is certainly no money in buying in feed.

They could run twice the stock in Wanganui, but had to learn to adjust.

“We probably pushed the envelope a bit here as North Islanders when we first moved. But it’s hard when you have 30-year-old genetics and capital stock you don’t want to get rid of.”

Although Rick admits the land is a bit “too good for Merinos” they do now cross Merino rams over their Romney ewes, to try and add value and reduce the microns.

They began cross breeding five years ago, more seriously in the last three years, because crossbred wool was performing so poorly.

Nowadays, there’s about 17 million sheep in NZ, and strong wool is just about irrelevant.

“To shear a sheep, you pretty much pay a bill. You’re getting between $1-$2/kg, it’s absolute shit.”

They used to shear every six months, but have now opted for every eight months due to cost.

“The cost to shear is $5-$6, if you are getting $2/kg for the wool you have to get 3kg just to pay the bill. So assuming halfbreds perform well, and we can maintain the good attributes of the Romney, we will be better off. In a few years’ time, more than half the flock could be a half-bred base.”

What is interesting is that a 19-micron Merino ram over a 35-micron Romney ewe will breed progeny with a 22-25 micron fleece.

Per stock unit, they’re better off by $40 with a halfbred. And breeding a halfbred sheep performing the same lambing-wise, they will be significantly better off.

“Nothing will beat lambing percentage and the meat price, no matter how good your wool is.”

“We have not so much given up on strong wool, but we are better off doing something we can control. But wool is a unique resource and it is sustainable, that is the big statement here.”

Ash has started taking over the reins of Red Oak Stud, where they also have an Angus breeding programme.

He enjoys the Romney bloodlines, but is nervous about the future of strong wool.

“Because how often do you see a wool advertisement? We have a lack of manufacturers, suppliers and production, so it’s just a vicious cycle. Strong wool farmers have no confidence.”

Ash agrees with his father that it will take some solid education about the sustainability of wool, and some Government direction.

“It would take the Government to say ‘all KiwiBuild houses have to have wool carpet.’ The Government should be saying ‘We want to use this wool product; farmers you produce it and we’ll use it.’”

As far as the breeding goes, Ash says if NZ strong wool farmers focus on strong bloodlines and solid data, collectively there can be a consistent strong wool product to take into the market.

“Because consumers don’t realise the unique quality resource we’ve got. It deserves continual investigation and time invested, because there are so many great attributes that need smart minds and market research getting behind it.”

‘The biggest problem is that we do nothing to add value to the strong wool industry. We don’t process anything here. Wool factories are closing down, but we need to make more products here.’ 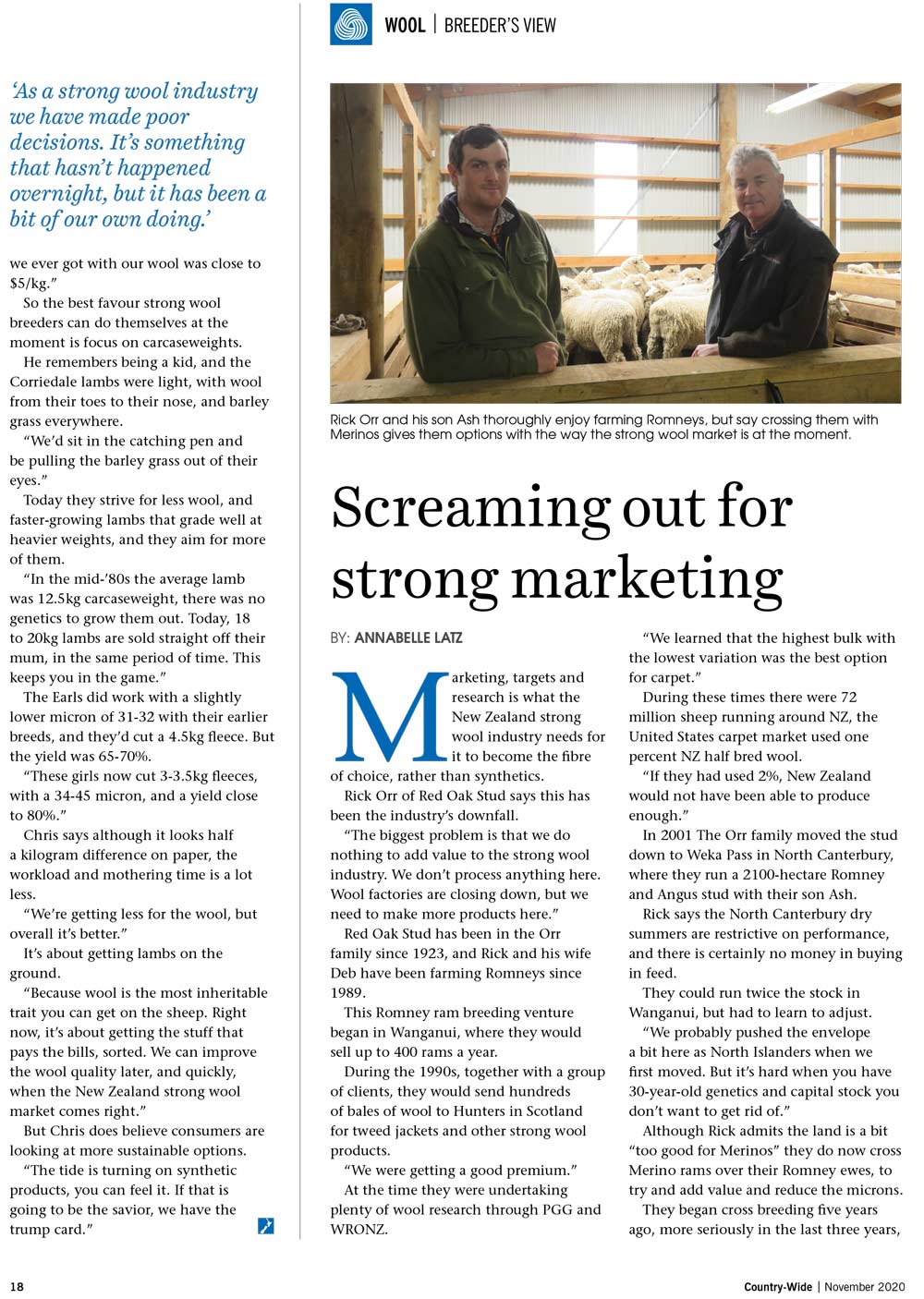 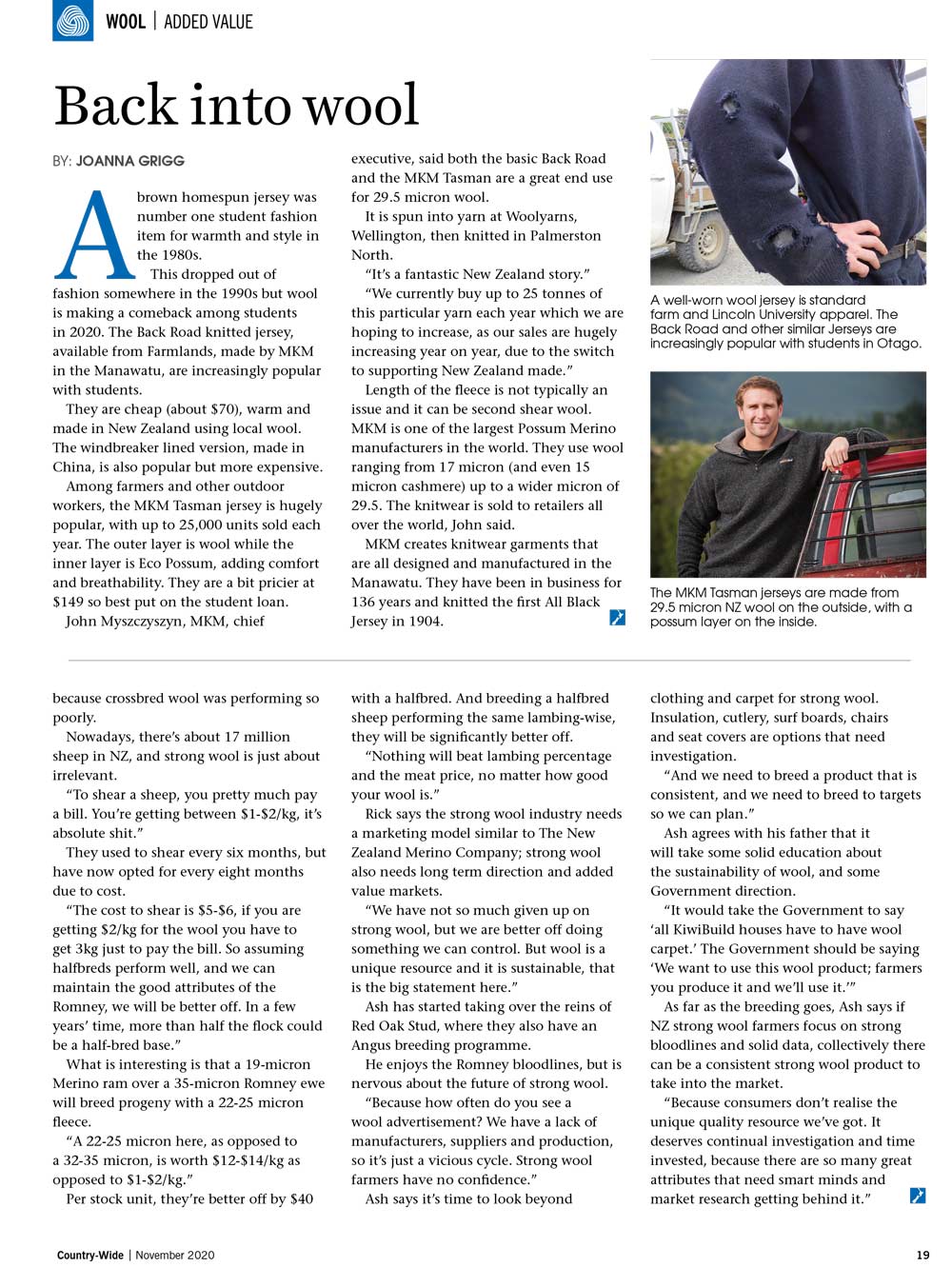