IT’S OCTOBER 2021 AT MULLER Station up the Awatere Valley where shearing has just finished, they’re into their first week of lambing, and the grass has just started to grow. Back in April up the Acheron Valley, Muller Station owners Steve and Mary Satterthwaite, their two children Alice and Ben, and the wider mustering crew were out on the hills for the Muller Station autumn muster, taking the ewes back to the Awatere Valley for the winter months. At the time, Steve was hoping for a good spring after a two-year dry spell with just two months of growth. Spring certainly would have been welcomed a month earlier, but after the challenging winter they were served, it’s starting to come right now – at last.

“We are going to have a very good early summer. We missed out on spring but there is so much moisture around now so we just need the heat,” Steve says.

He’s positive the frosts have more or less finished which will serve well for 35 days (two cycles) of lambing. In fact, the first 10 days of lambing could not have been kinder. Spring coming a month late is not an isolated pattern. The clear message over the past few seasons is that autumns are getting longer, winters are going later and therefore spring is starting later which means a delayed summer. September served a record rainfall of more than 350mm. Put this against their annual rainfall of 500mm and that’s some serious precipitation. In July the Marlborough region suffered a severe rainstorm. Awatere Valley Road was closed for 10 weeks due to slips and damage, making it impossible to get to Blenheim which eliminated opportunities of getting feed in or stock out. Even now with the road reusable it will be closed to public use until at least Christmas while continuing repairs are made, Steve says. Due to the time of year, this road closure was more stressful for farmers than when the road was closed for 19 weeks after the earthquake in November 2017. The impact this time around on animal management and livestock was greater, he says.

“That (the winter storm) was a bit of a major, but we got through.”

Farmers talk about climate volatility and how to best work with it to suit their farming programme, he says. That conversation may need to include reconsidering dates like when to put the rams out or when to shear. “It is something we need to roll with and understand a lot more. We need to re-evaluate if we have it right.” Muller Station is 38,800 hectares, including 28,000ha of pastoral lease. The Satterthwaites operate a “fairly simple” system, due to having genuine summer and winter country. The Awatere Valley is good for lambing and winter grazing, and the Acheron Valley is great summer country. This absolutely minimises winter feeding and crop growing,” Steve says. The calves and studs get supplementary winter feed of ryecorn crop and lucerne balage but normally nothing else does. At baling time, they save cost by working in with neighbours Molesworth and Middlehurst Stations to get a contractor in from Blenheim. Muller Station runs 6500 ewes (including just under 600 stud ewes), 5500 hoggets, 100 rams and 2300 Angus-cross cattle. Steve and Mary first bought Merino genetics from Charinga Merino Stud in Victoria, Australia, in 2004. Their ongoing relationship with the stud has created a consistent breeding base, allowing them to focus on breeding the sheep they want. It began with selecting a commercial ewe mob of 200 reflecting what they liked – a good dual-purpose sheep – and they aimed for consistency from the outset.

“We were lucky that our ewes really clicked with the original two rams we brought in.” Since then, they’ve used several sires from other studs from Australia and New Zealand. “It’s about muscle, fat, conformation, the quality and quantity of the wool and trying to produce the ideal dual-purpose sheep. And with that comes fertility,” he says. “Being on the same page as our ram clients is huge, sharing with them our breeding direction, listening to them, and taking on board their feedback.”

Steve says Covid-19 has changed the way farmers buy genetics. Going to Australia to look at rams is not currently an option. Because of that, Muller Station started using artificial insemination over some ewes. This year, 100 out of the 550 mated were inseminated artificially. “It’s always exciting seeing how that goes; how many lambs we get, what they look like and how they grow.” The Satterthwaites are clients of neXtgen Agri, and Steve says the advice and logistical help they receive is invaluable. Despite Covid-19’s impacts, Steve says commodity prices are near all-time highs, with contract prices with the New Zealand Merino Company (40% of their income) and high beef and lamb schedules looking the best they have ever seen.

“In fact, commodity prices for the past three years have been some of the best I’ve experienced in my farming career.”

The wool boom in the 1950s is regarded as a great era in NZ farming, but the difference now is all commodities (fine wool, lamb, beef and mutton) are really strong. Steve says the farming sector must seek to build stronger relationships with urban NZ. He believes the NZ Merino industry is an exemplar of environmental management standards for farming. “If we can portray that unity with our New Zealand partners and the integrity that goes into these relationships, the potential has never been better.” He’s a strong supporter of quality assurance programmes like ZQRX, introduced by The New Zealand Merino Company, because they are independently audited.

“It’s about focusing on the environmental issues that we face, which is why we have to be so constructive and positive in the messages we portray.”

Wind the clock back to the days of high country field days which started in the 1980s. In the early 2000s it was hosted by Muller Station, a few hundred farmers and industry partners stood around chatting about the concept of sustainability in the high-country. “It really was a topic. Today the term regenerative agriculture has become the buzz- phrase, but simplistically we’ve been doing that for the last 50 years.” Steve says farming today is about being aware of change, and the need to change, industry wide. The challenge is finding the balance to farm productively and profitably, in a sustainable and biodiverse way. 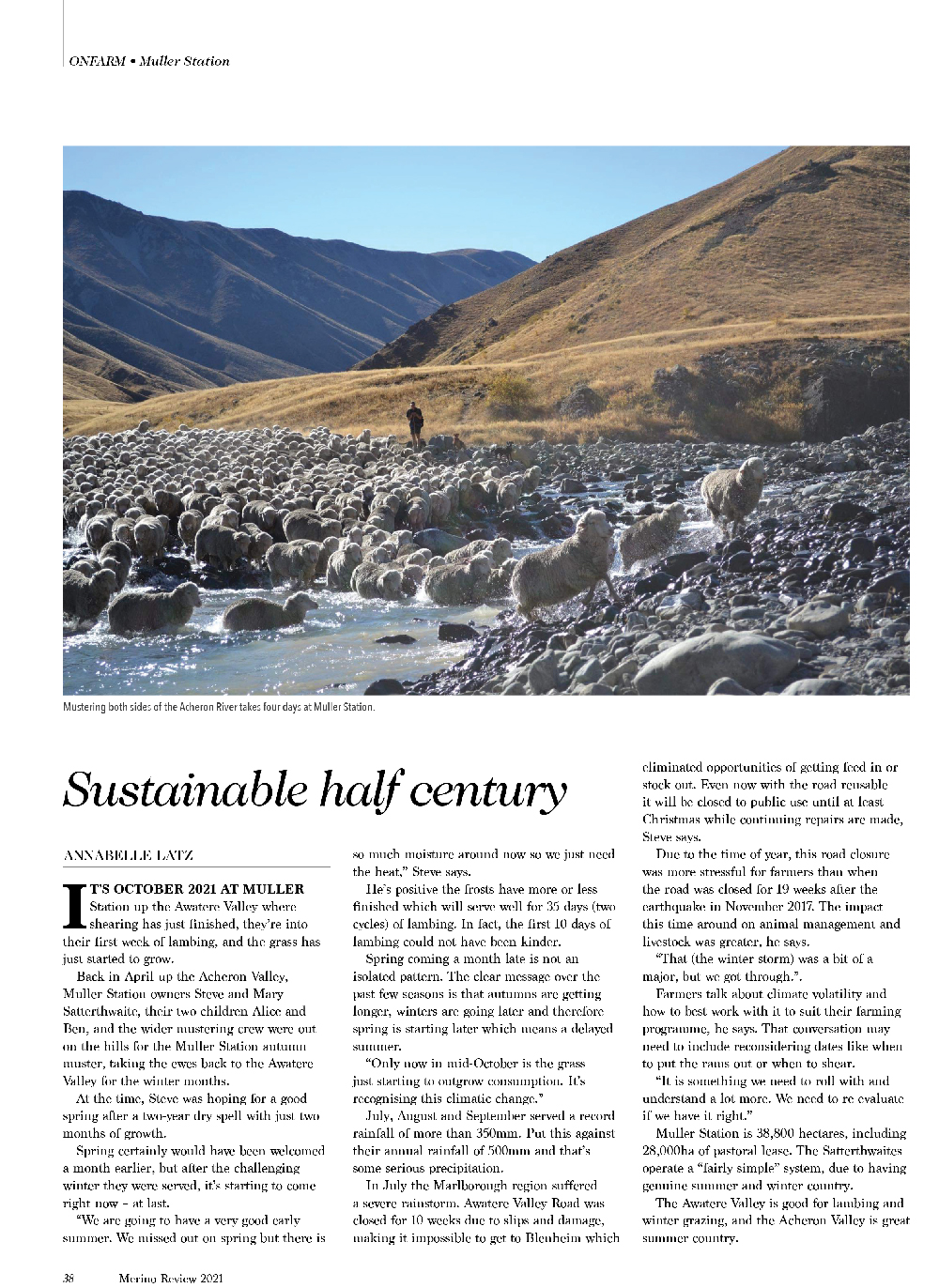