Taihape vet, farmer and family man Anthony Oswald finds adventure racing takes his mind off the everyday as well as being good fun.

Annabelle Latz tracked him down to find out more.

Multi day adventure racing means entirely removing yourself from society. Your entire focus is about getting to the next checkpoint. All you think about is eating, navigation, and when you are going to lock in your next three hour sleep. It means no phones, and none of the day to day pressures of being a busy vet, farmer, father and husband.

Taihape-based veterinarian Anthony Oswald was gearing up for GODZone Adventure Race. This took place in Rotorua on March 6. He says that the longer the race, the better. “I usually finish these races physically drained. But mentally I feel like I’ve hit the reset button – I think this is a result of the mind operating with a simple focus and a good dose of sleep deprivation.” Self-described as a jack of all trades within his veterinary profession, Anthony works mainly with sheep, beef and deer, but also has quite an interest in orthopedic surgery on working dogs. “I just try and avoid cats and small white dogs.” Creating good relationships with farmers is a priority, as well as a favourite part of his job. Anthony says this is imperative to forming a sound partnership between advice delivery for key topics like internal parasites, flystrike and trace elements. It quickly became apparent early in his career that the business model of rural veterinary practices is heavily reliant on the sales of animal health products for a sustainable business. He said a good vet must also have great knowledge about animal health products that are at least part of the solution for animal health issues. “It’s about creating good relationships with farmers so they would first trust, then value my advice.” He finds the vet profession rewarding when he is able to work with clients to change management practices that lead to increased farm performance, and finding solutions to problems both stock performance and animal health related. In addition, he still gets a kick out of the likes of calving a cow and getting a live calf, or doing surgery on an injured dog and getting it back to work. “Not a week would go by I’m not learning something new – a new surgical technique, a new synchrony programme for artificial insemination (AI) in cattle or a different treatment for a disease.” Born and raised on the family farm Duntroon up the Awatere Valley in Marlborough, Anthony has sheep and beef farming running through his blood. Becoming a sheep and beef vet “seemed a good idea,” with local vet Pete Anderson being an inspiration. Anthony and his wife Charlotte with their two young children Pippa, 8 and Jonty, 6, farm 50ha close to Taihape where they finish 280 weaner stags and a small Texel stud.

Anthony gets a lot of satisfaction being part of an industry that has a great track record in increasing performance but is also in a good space environmentally. He makes a point of noting the performance of sheep farming during the last 30 years in New Zealand. Total sheep numbers have decreased by 30.6 million (53%) yet lamb production is only down by 9%. This increase in performance, a result of a 31% increase in lambing percentage and an increase in average lamb carcase weight of 5.2kg (37%), is “nothing short of amazing.” Over this period greenhouse gas emissions from sheep have also reduced by 41%. While the heat has been on the rural sector from an environmental perspective, he believes sheep and beef farmers are generally doing a good job and responding well. Around the Taihape region, farmers have been very proactive in fencing waterways off. More recently local catchments groups have been set up, one outcome being the testing of waterways. Most of the early results are highlighting how good the water quality is around sheep and beef farming. “Greenhouse gas emissions for the sheep and beef sector are 31% lower than 1990 levels. People in the sheep and beef sector preaching these type of facts have little impact in changing the public perceptions about farmers’ impact on the environment. The key going forward is to get others to be telling our story.”

Anthony cut his teeth in the vet profession as a locum in Balclutha. His second job was in Alexandra, Central Otago. He quickly realised that while researchers and vets before him had provided a great deal of knowledge he could draw on, there were still many unanswered questions out there. From early in his career, he has presented papers to the veterinary profession on sudden death in ewes due to listeria, veterinary involvement in an animal welfare investigations, copper deficiency and toxicity, plantain – associations with milk fever in sheep and bloat in cattle, bull breeding soundness, fodder beet use on sheep and beef farms, drench resistance, and ectoparasites in sheep. “I knew early in my career that it was important to help answer some of these questions as a way to contribute to the vet profession and to New Zealand agriculture.” Like any profession, with the joys and highlights come the challenges. Anthony says being on call is a real tie of the job that most people don’t appreciate. He adds that the veterinary profession provides a far better after hours emergency service than the human health system in rural areas. Drench resistance is an area of his work where he openly admits he does not always have the answers, and the veterinary profession has changed its message several times over the last 40 years on the best way to manage it. “Now we are dealing with farms on a daily basis that have Trichostrongylus worms that are resistant to triple combination drenches – there is no scientific research to draw on to tell us the best way to manage these situations, so we are having to work with farmers using the best of the knowledge and tools available to navigate through this time.” Anthony’s career has included teaching final year vet students at Massey University, postings in Piopio in Waitomo and Gisborne, and further abroad he practised in the United Kingdom for a year and worked one month as a voluntary vet in Morocco.

A MAN OF ADVENTURE

Outdoor adventures certainly featured during his travels, one stand out was a month of trekking through the Himalayas. His initial two year stint in Taihape “on the way back to the South Island” has turned into a 16 year permanent stay. It’s no surprise that Anthony has a full plate. Where most would see his commitment to adventure racing as an inconvenience, Anthony sees it as a method of keeping everything level. A ruptured knee ligament in 2006 put a halt to competing in the Coast to Coast and other multisport events. Eight years later a bet with a mate resulted in Anthony taking on IRONMAN Taupo on virtually no training. Apparently it wasn’t pretty but he did finish. This was the start of the competing again and in 2015 the GODZone bug hit. His team, consisting of two other men and one woman, took top podium spot in their first attempt at the ‘Pursuit’ race in the Tasman region, and backed this up with a successful title defence in 2016 in Queenstown. A racing highlight was their win in Queenstown. Their good lead was diminished on the penultimate stage due to some bad navigation calls. Coming into the final transition they thought they’d blown it, only to find they still had the lead but by only 30 minutes. “The last stage was a 50km kayak up Lake Wakatipu – the race had taken about three and a half days, and we won by 15 minutes.” In 2017 they accepted the challenge of the GODZone ‘Pure’ race in Fiordland, which is a slightly longer course that does not allow for support crews. They learned intimately the brutality of that pocket of New Zealand wilderness. “The longest stage took us 84 hours. The last trekking stage was only 21 kilometres but took us about 24. It was tough going but we had some amazing scenery.”

Anthony loves the long length of GODZone, being in the wilderness for up to a week. “The longer the race, the less it is about pure speed and athleticism, and more it is about strategy, navigation, sleep deprivation and suffering – which suits me just fine.” He says GODZone can throw up a lot of situations. You can be tired, buggered, hungry, cold, lost, have broken equipment, and that’s just for starters. It is really easy to fall apart individually and even easier to fall apart as a team, especially if your navigator has had you trekking up the wrong valley for three hours and you have to turn back. “You and the team need to keep it together. In these situations you just control the controllables – eat more food, put on some more clothes, and get moving the right direction as quickly as possible. You can’t dwell on any negatives, I always just say ‘it is what it is’ and just get on with it.”

Anthony says like most, he’s time poor. He knows people must ask why a time poor person takes up adventure racing. His approach is straight forward. He makes as much of his time as possible through quality time. The training he squeezes in is done flat out, as hard as he can go. His theory is to train at a pace much harder than race pace, so his body will find the racing relatively easy and will therefore be able to just keep going – “although you won’t find this training regime in any books.” “I try to take this concept of quality time into the other aspects of my life – whether it be family, work or farming, it’s about not sweating the small stuff, having simple systems and trying to make sure that the time is getting the best output possible.” 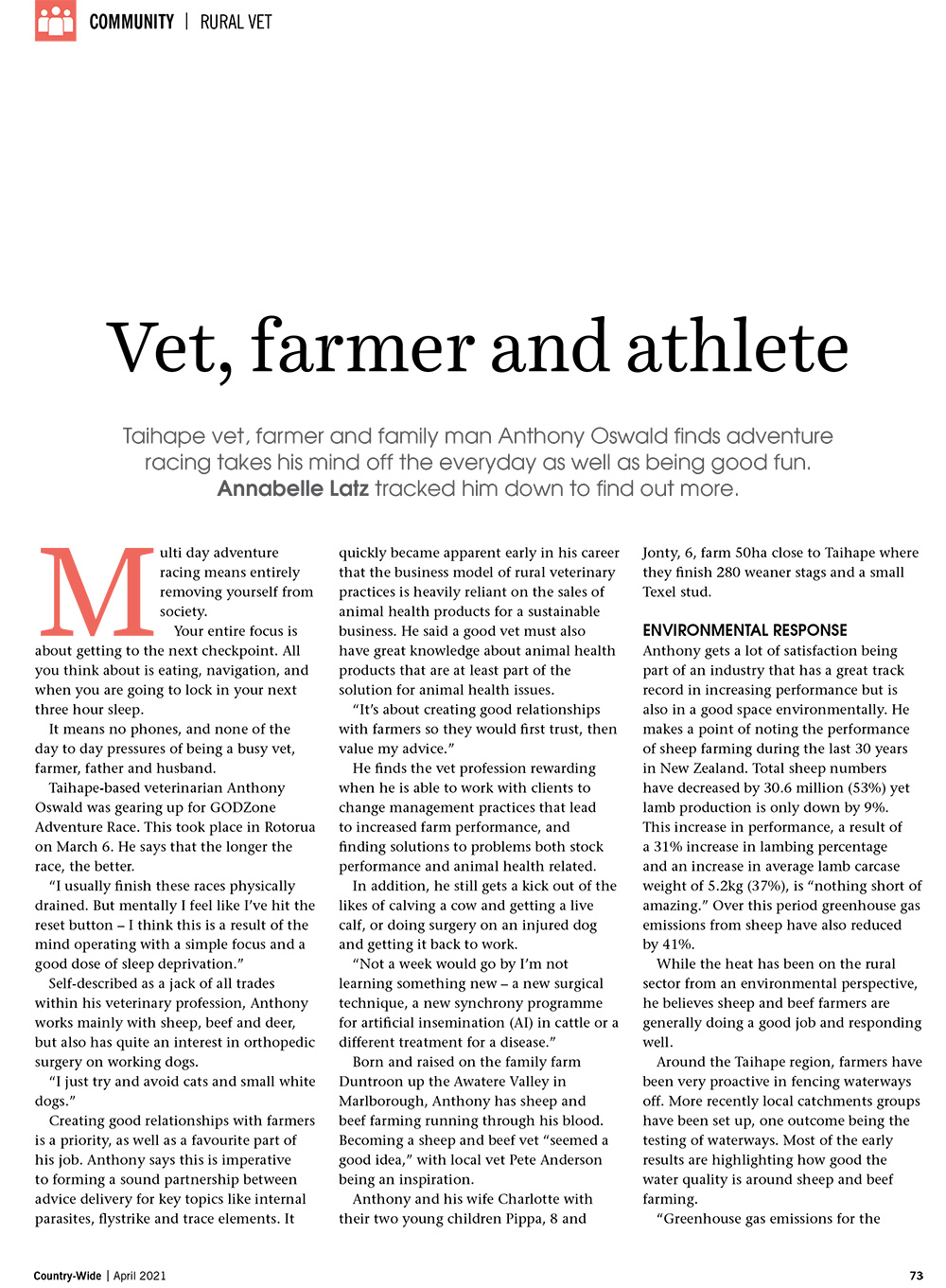 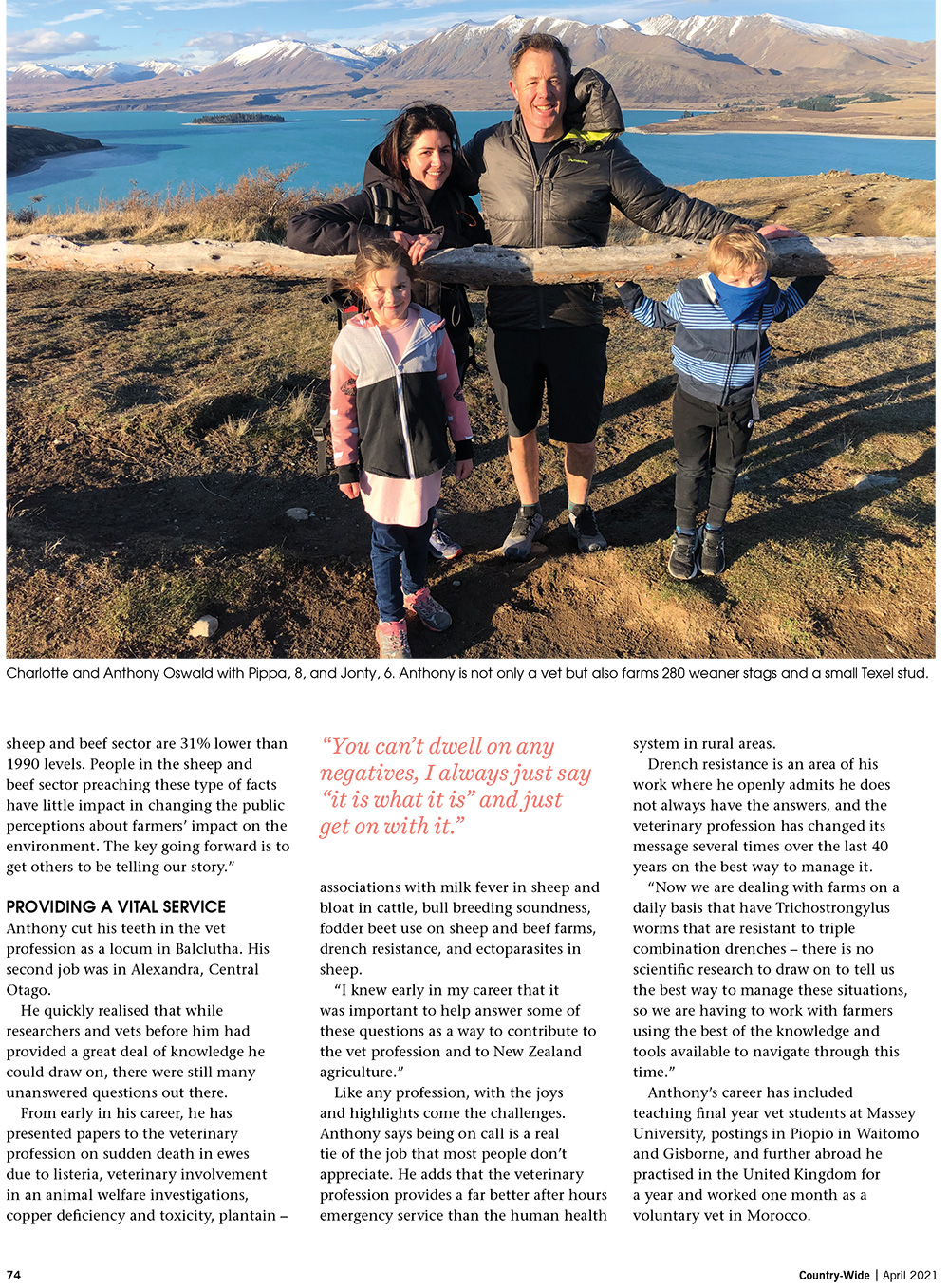