Coming from a farming background, TB testing seemed a logical career move for Mel Brooker. It was back in 2014 and Mel had recently moved to Oxford, North Canterbury, from Hawarden. A change in personal circumstances meant she had to find a new way to make a living for her and her three children. Her new direction came down to good timing, and who she knew.

“It was just chance really. I knew I had to make a change, and one of the TB testers rang me and asked if I’d like to try.”

What followed was an intense training three month module involving written, legal and practical aspects, all under the umbrella of the Ministry of Primary Industries and OSPRI. Mel enjoyed the training because it was hands on. Her first job was with Vetent, who was the contracted TB testing company to OSPRI at the time.

“I’m really blessed to be able to get around the countryside and see some amazing places. Going into Lees Valley brings back fond memories (I had) as a kid.”

Her job has seen changes over the years, from the frequency of testing, to her job role, to what company she is contracted to. Mel is working for AsureQuality now, who has the TB testing contract with OSPRI. Her testing area of North Canterbury runs from north of the Waimakariri River to south of Amberley, and from the Main Divide to the east coast. Lifestyle blocks and high country stations such as the iconic Mt Algidus make up part of Mel’s territory, although she is predominantly dairy farms.

“I enjoy beef farms the most. You get the privilege to visit other people’s lovely properties”

When Mel started testing, farms were monitored annually, now it’s tri-annually. All animals over 12 months old used to be tested, now it’s everything over 24 months. “The frequency of testing works a bit like a dart board, with the risk of TB at the centre – the further out you go, the less risk therefore the less testing required.”

Lifting tails part of the job

Mel is also an assessor, training future TB testers. The assessment method has not changed over the years; The skin test involves putting the left hand under the tail, injecting 0.1ml of tuberculin into the caudal fold of the tail, and returning three days later to see if there is any reaction. A reaction is a lump, which can be the size of a piece of rice to a golf ball. This lump means the cattle beast has a reactor tag inserted into the ear, and 10-30 days later the assessor returns to take a blood test underneath the tail. It’s not unusual for skin tests to return positive, but it’s less rare.

“I’ve never had a positive animal in my area, but have had positive blood tests.”

Mel injects on Mondays and Tuesdays, and reads the tests on Thursdays and Fridays. When dairy sheds are busy she’ll do up to four a week. On average one dairy shed takes four hours, some as big as 1400 cows. She said TB cases are in general tracking downwards in NZ, thanks to vector control with possums, ferrets and stoats, surveillance and robust testing.

“There are still a lot of autopsies being done on possums, and the culling has helped a lot.” Live exporting and farm assurance are other parts of Mel’s job. “Lifting tails is still 90% of my job though.” Compared to other countries, she said NZ is progressing well on the TB front.

“It’s about our good Kiwi attitude, with good systems in place.” 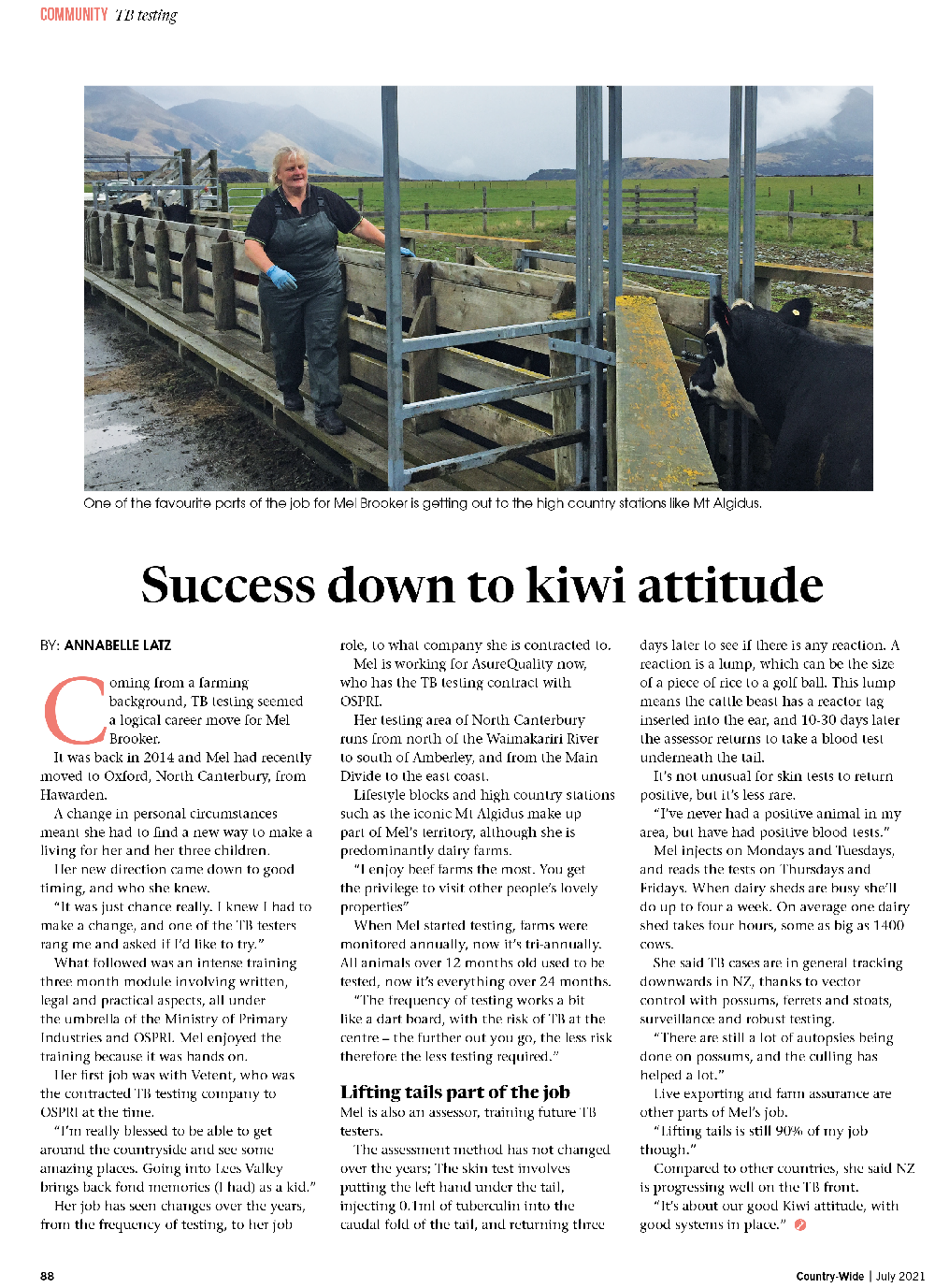