Running on a moonscape. Botswana 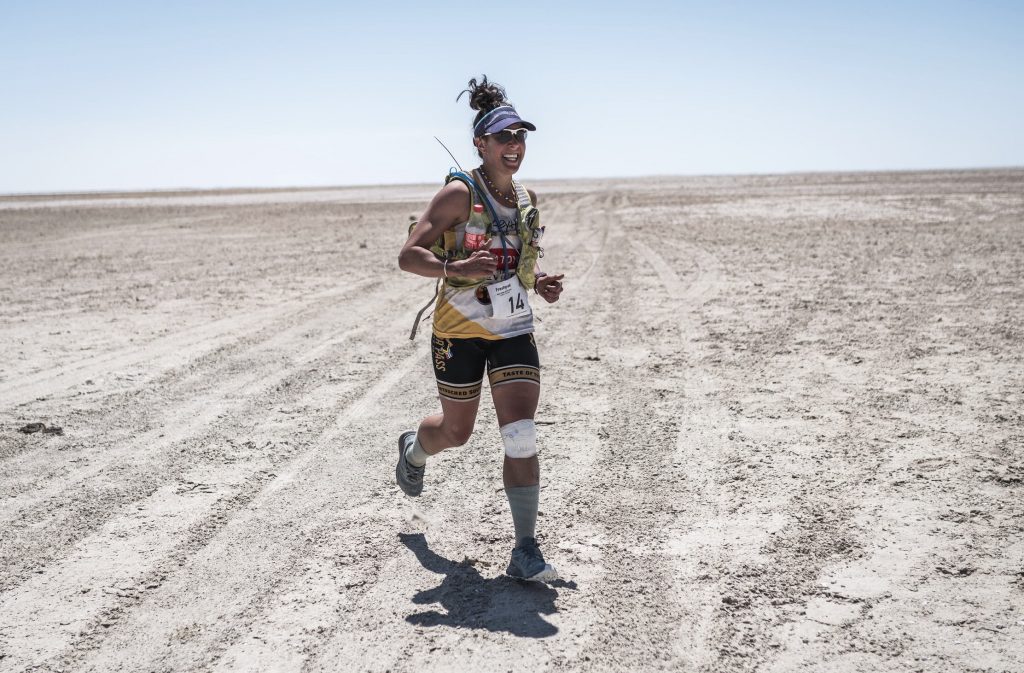 Nothing could prepare me for it, and nothing will ever compare to it.

Running on a white vastness, a cloud-whispered light-blue sky above, amongst an absence of landmarks and an abundance of flat land…

For 100km, over three days, 25 of us ran across a section of the Makgadikgadi Salt Pans. Located in Northern Botswana, this vast expanse of white, similar to the size of Switzerland, used to be a lake. Over the years, the lake has dried up as the area has gradually become drier due to seasonal change, although there are still times of the year when sections of the Pans are uncrossable.

The race village on Kukonje Island, just a couple of hours from Francistown amongst the giant baobab trees, had all the basic comforts one could wish for pre- and post-race, and, surprisingly, enough featured a small rise or two and some grasslands. But a look slightly to the left or right, and the expanse of salty ground cast our eyes into infinite.

Day One was a 12km night run around Kukonje Island, a gentle introduction to this special place, where we got used to the sand, dirt, dust and occasional rock outcrop under our feet. We took off at sunset, which posed a challenge for the first part of the race, as we were nearly too awe-stricken by the light and vastness to focus on running!

Focus was essential, though; it’s surprisingly difficult to run in a straight line on these Pans. The GPS watched closely.

Dinner and breakfasts were provided by Botswana’s bush food extraordinaire Food Girl (Food Girl BW on Facebook), which left us wanting for nothing. With full tummies and maybe a beer from the local brewery tent, Big Sip, we headed to bed for an early start for Day Two. 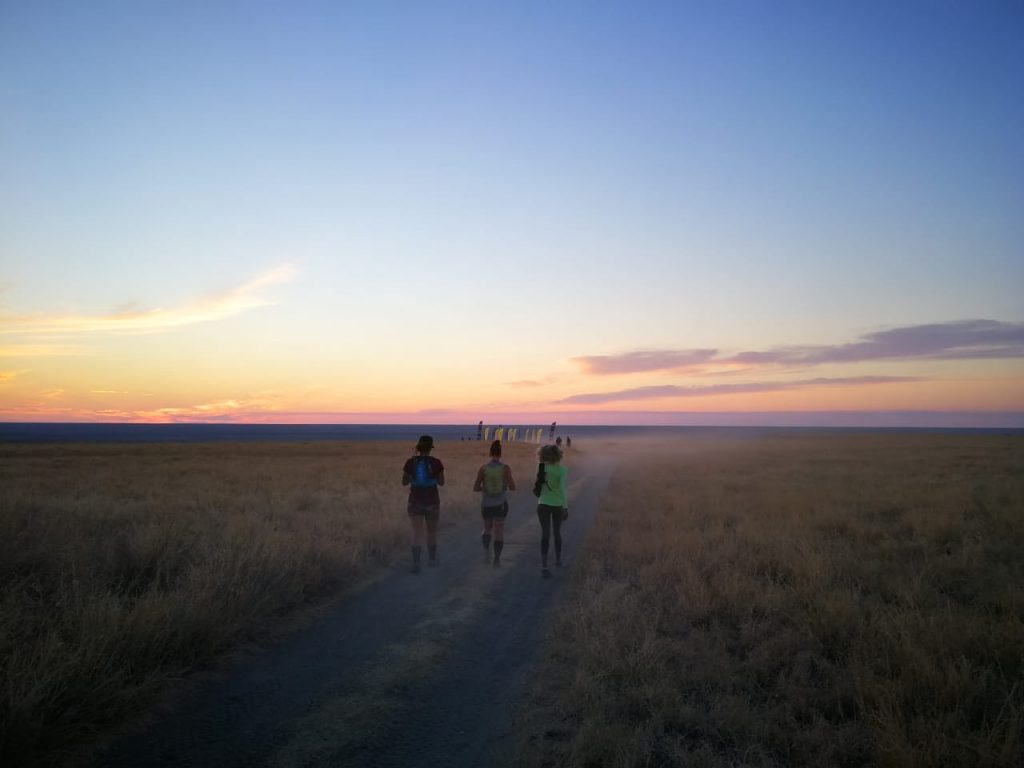 At sunrise, we were off on our 52km foot journey into the middle of the Makgadikgadi Salt Pans. The main thing to get our heads around was the vastness. It was flat as far as the eye could see. We ran in a series of straight lines, and the aid stations supplying us refreshments could be seen for several kilometres before we reached them – a mind adjustment that helped keep us sane.

I ran by myself for the majority of this 100km journey over the three days, stopping in my tracks more than once to listen. There was not a person, bird, tree or insect in sight. Just the sand at my feet, the mirage on the horizon, and infinite blue sky above. It was the closest I’ll ever feel to running on the moon.

The flags for the finish line of Day Two teased me for 10 kilometres. After what seemed forever, I reached them, happily collapsing onto an awaiting mattress under a gazebo, wholeheartedly slugging some Coke.

As time merged into the afternoon, I watched in awe as the remainder of the field reached this sweet spot in the middle of the Pans. There were smiles, happy bodies, broken bodies, crooked bodies, sore feet, and a couple of tears. There was also encouragement and respect for each other, and we were all grateful for having such excellent support crew, awesome food, drinks and snacks pre- and post-run, a medical crew, and a physio team.

We hunkered down for the evening as the sun dipped, all taking a quiet moment to gaze into the distance, absorb the enormity of where we were, watch the herd of donkeys walking into the sunset, and feel chuffed with life. With a full tummy and a crackling fire, the hum of distant chatter and a star-studded sky, I drifted into a blissful sleep.

Day Three dawned, and after a quick but hearty breakfast of porridge and strong coffee, our GPS told us we were running in a straight 36km line back to Kukonje Island. It took a couple of kilometres for the legs to wake up, but the crunch of the salt beneath my feet and the cool pre-sunrise breeze soon became rhythmical, and it was homeward bound.

This was the toughest day; a day of mixed emotions as the Salt Pan journey was soon to be over. Thrilled to be done, but also sad it was soon to be a memory. Approaching the finish line in second place overall and second female, I took one last chance to embrace this harsh, unique environment, with its moon-like atmosphere and airy surrounds.

Taking a seat under the shade of a tent at the end, cold drink in hand, it was awesome to see the smiles on every person as they reached the finish line. Smiling in respect of their effort, smiling in happiness to be done, and smiling in awe for the environment they’d been lucky enough to run through for the past three days.

Running 100km across the Makgadikgadi Salt Pan. Tough? Hugely so. Humbling? Like never before. Memorable? For the rest of our lives, absolutely.

For more info head to www.saltpansultra.com