A Department of Conservation programme to cull Himalayan Tahr from the mountains of the Southern Alps has stirred up the hunting community. Annabelle Latz reports.

The tahr hunting community fear the Department of Conservation will cull the tahr population in two of the South Island’s National Parks to a level that will strip away their ability for recreational and commercial hunting.

Within its review of the Himalayan thar control plan 1993 (HTCP), DOC said its estimated population of 34,500 tahr is too high, and has commenced a controlled culling programme across the feral range which includes Mt Cook/Aoraki National Park and Westland Tai Poutini National Park.

This operational plan for 2020-21 is on hold for now, however, because the New Zealand Tahr Foundation (NZTF) in early July filed judicial review proceedings against the Minister of Conservation and Director-General of Conservation.

The foundation’s claim that DOC’s time frame to allow for reasonable review of the revised Operational Plan was inadequate, was upheld, resulting in DOC being instructed to undertake only half of its proposed 250 controlled culling hours throughout the feral range, until after further consultation with stakeholders took place.

This consultation took place at the beginning of the month and included 12 oral and 13 written submissions.

DOC will be making a decision about its number of culling hours by the end of the month.

Operations director, says DOC made the decision to undertake only 60 hours within the National Parks while consultation was carried out, and took place between July 1 and early August, and he said the planned activity was made public.

“DOC is in agreement that further research is needed for effectively reviewing the HTCP 1993 plan.”

Reddiex admits the plan has never been reviewed, as was intended when it was first published in 1993. He also sympathises with the tahr hunting sector, and acknowledges how special National Parks are to them as a place to hunt, but says there will still be tahr in the National Parks, just not to the quantity they are now.

Population density reviews happened between 2016 and 2019, tahr populations estimated from aerial surveys across a number of two kilometre square grids.

DOC will be proactively publishing maps which include sightings of bull tahr outside of the National Parks, to help trophy hunters plan their next hunt.

The Tahr Jam was a huge success for the NZTF last month, which saw more than 1000 people in 600 vehicles drive slowly from Lake Pukaki to Mt Cook Village, in a bid to peacefully rally against DOC’s magnitude of proposed culling hours and the targeting of bull tahr in National Parks – which through mutual agreement, hasn’t happened for years;  55,000 people also signed a petition requesting DOC ‘halt the 2020-21 tahr cull and review the Himalayan Tahr Control Plan’.

As a crowd gathered in the village, some mentioned helicopter culling had begun without any prior notification to park users and tahr were being shot in close vicinity to huts and around people in the hills, ruining their long-awaited trips, some who had travelled from the North Island and incurred considerable expense. Witnesses say tahr took 18 shots to kill, while some were left wounded and died slowly in the snow.

Willie Duley, NZ Tahr Foundation spokesperson, acknowledges DOC was given the right by the High Court to begin its 125 hours of interim culling last month without consultation, but says he hoped they would have been more collaborative in their approach to reduce conflict.

He says it’s the amount of common ground among the stakeholders tied up in this debate continually being ignored that is the most frustrating for the tahr hunting industry. Having a tahr population in the National Parks which enables the natural habitat to thrive is what hunters want just as much as non-hunters, and it can be achieved with proper consultation and a well thought out management plan.

“We can all have our cake and eat it too”.

There are 166,000 highly passionate hunters in NZ, many more than happy to continue helping with control work.

Duley is concerned with the 34,500 tahr population DOC talks about, this figure an average, estimated on their population data gathering that took place between 2016-2019 which ranged from 17,000 to 54,000 tahr.

“A three-fold increase in culling from DOC is frightening and totally unwarranted, particularly at a time when hundreds of hunting businesses are still hurting from the effects of Covid-19. There is no conservation imperative for this magnitude of culling and their continual spin on this issue is very misleading.”

Duley says hunting would not be viable in the National Parks if populations were reduced to DOC’s intended zero densities.

“That is our major concern, especially when we’re the largest user group of much of the parks.”

He would also like to see DOC focus on targeting nannies as this is the best way to control population while bulls are the recreation incentive and income provider for thousands of Kiwis.

“Our mental health relies so much on spending time in those mountains and living among tahr. I challenge anyone to say a bull tahr in that rugged and inhospitable environment isn’t impressive.”

‘I admire how they are able to survive in such a harsh environment. Those mountains, that terrain, it’s no easy feat to carve out an existence in that environment…. It’s also important to us to know where our food comes from.’

Highlight of the year

A tool for escaping the hustle and bustle, spending time with friends, and gracing the same challenging and remote areas as the tahr.

“In this day and age it’s getting harder to get that kind of adventure, where you feel you are the first person to visit a place. I think time in nature and the challenge of remote places is a fundamental experience that all people should have.”

Although he admits the worst part about hunting is actually killing an animal, he says hunting is also about the connection with food.

“I admire how they are able to survive in such a harsh environment. Those mountains, that terrain, it’s no easy feat to carve out an existence in that environment…. It’s also important to us to know where our food comes from. For hunters, we know the animal before it ends up on our plate. It’s such a natural thing, it’s a natural process.”

Non-hunters sometimes join him, a life-changing adventure and a chance for the them to gather an understanding of what tahr mean to hunters as a resource.

“There are two sides to the discussion, and yes I agree that numbers need to be managed. But it doesn’t take much to tip the balance. Removing them completely from National Parks is callous and unnecessary.”

Before the cull DOC enforced in 2018, Matt would see mobs of 50 tahr, and during his recent trip to Westland he saw perhaps 25 in total.

He vividly remembers his first-ever tahr hunting trip 15 years ago up the Bettison Stream in South Westland, and that immense enjoyment still stands today.

“We love the idea of tahr collectively, more than we love individual tahr. Hunters understand the need for population control, but not at the expense of the resource that provides organic free-range meat, a fantastic challenge, and gets so many out to experience our wild and remote places.”

Matt suggests tahr is managed in the same way Wapiti in Fiordland is managed, where animal management and population control is undertaken through a strategy jointly devised by hunters and DOC.

“If populations get too high, tahr do damage flora and fauna. But the tahr hunting community believe there is a balance that can be achieved between looking after the alpine environment, and having tahr there.”

“A three-fold increase in culling from DOC is frightening and totally unwarranted, particularly at a time when hundreds of hunting businesses are still hurting from the effects of Covid-19.” 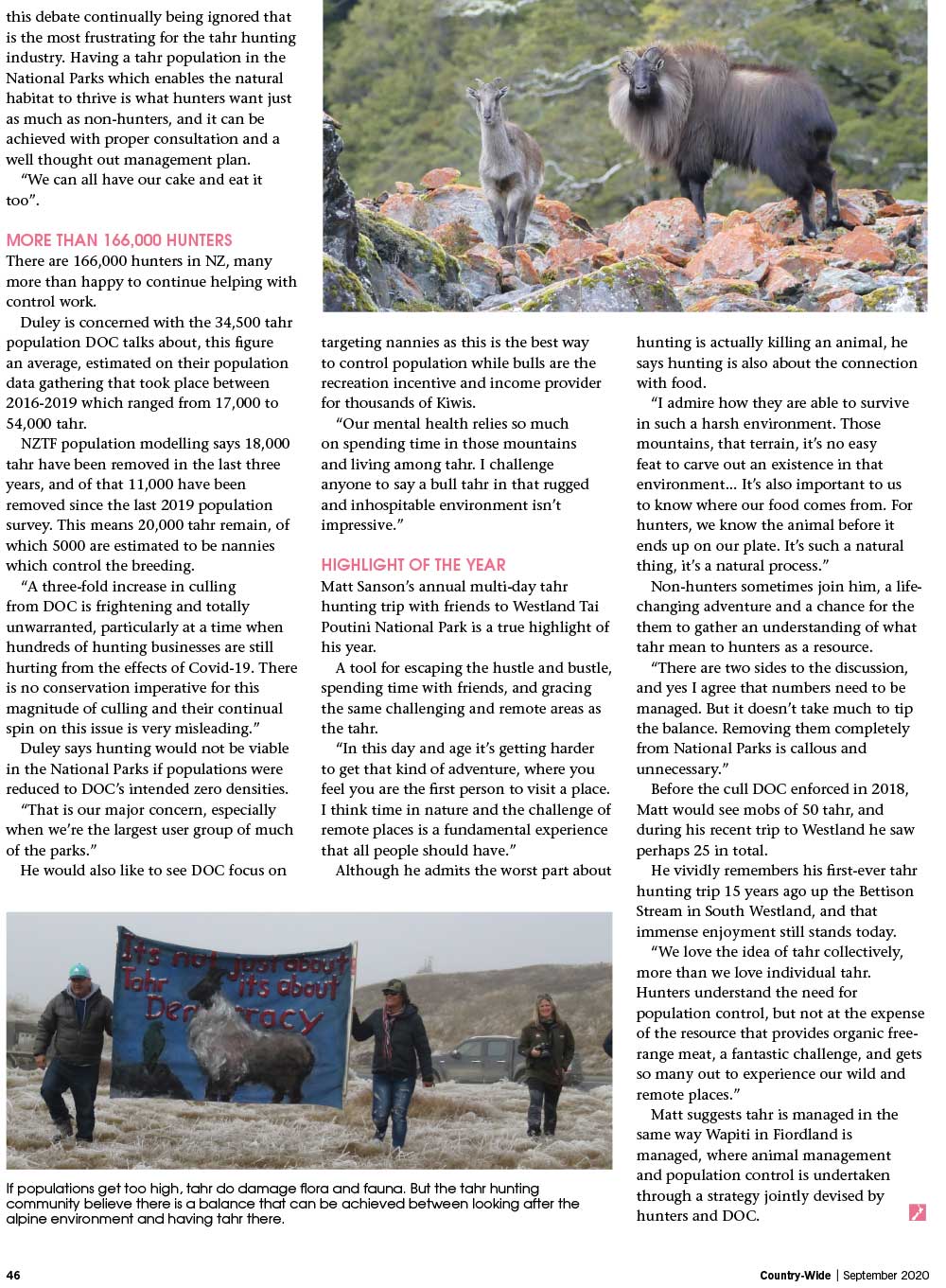