A Southland farmer has stripped off in protest at policies encouraging carbon farming, Annabelle Latz writes. Photos by Chris Sullivan.

Once you plant an entire farm in trees as a carbon farm, that’s the farmland gone, forever. The day before Christmas, 2021, Southland farmer Logan Evans bared all in a video posted on the GroundswellNZ Facebook page. He was expressing his disgust and concern about the government’s solution to reducing carbon emissions. In the background of the video was Logan’s neighbour’s 1100-hectare property, a rolling sheep and beef farm. It was sold recently to the overseas company Ingka, the parent company of IKEA, for carbon farming, or ‘carbon mining’ as it is often referred. Logan says this country is being sold for carbon forestry.

A handful of local farming families tried to buy the farm, the highest offer of $10.8 million being far short of the $14.3 million price tag offered by Ingka to plant it in trees. Logan admits he can’t blame his neighbours who sold. “We just can’t compete with it though, can we.” He says he shares many fellow farmers’ concerns, that any overseas person wishing to buy less than 1000ha of forestry rights per calendar year, or if they are an Australian citizen or in some circumstances an Australian entity, are not even required to obtain a consent from the Overseas Investment Office. As a committee member of GroundswellNZ in Southland, he’d been talking to fellow members about the best way to get traction about this issue with a video.

A previous video about water quality Logan had posted received 230,000 views, but it was suggested more traction could be achieved if Logan’s face was in it. He took this suggestion one step further, and decided to have more than just his face showing. To keep his modesty, he held a container of glyphosate spray he said will soon be applied to his neighbours’ farm to destroy any existing vegetation. Logan was hoping the video would turn into clickbait.

“I wanted to get at least a couple of hundred thousand views, and ended up with 60,000 which was a bit disappointing.”

Anyone who knows him will appreciate he was not comfortable taking his clothes off for the video, he says. He believes rural New Zealand knows what’s going on with carbon mining and can appreciate what a poorly thought out policy it is. But urban NZ doesn’t understand that once a farm is mined for carbon, it’s gone from food production forever. “All the readers seeing this article will know what is wrong, but the main thing we have to do is motivate the rural people of NZ to tell this story to their urban friends, and explain that policies like this are worse for the environment, not better.” Logan says 25% of NZ’s native vegetation is on sheep and beef farms. These conflicting policies enforced by the Government are putting this under threat as these are the areas that suit carbon mining. It is ridiculous to think NZ can plant some of its best food producing land in trees for carbon mining and it will solve the world’s problems, he says.

“Meanwhile global emitters carry on their pollution, but market the fact they are carbon neutral – this is an absolute joke.” The trees taking up precious farmland only have a certain life span, and after about 100 years they will start dying, and emitting carbon. “I am no scientist, but why are we not deciding where we want to be in 100 to 200 years, why has this government only got a two-year plan?” He says the Government is looking for a solution to tick a box at the next United Nations summit but NZ’s environment and economy will suffer the consequences.

Logan, 40, is the third generation on his family’s 3300ha sheep and beef farm Mt Peel in Otamita Valley, Southland. He and his wife Nicole have three young children, and he fears farming may not be an option for them. “That is the concern isn’t it, that is what I am here for, so my kids have the opportunity to farm, own and run a business in New Zealand.” He believes many traditional farming families are being driven out because of unworkable regulations, which makes them ripe pickings for carbon mining and the average NZ farmer can’t compete.

“When we lose these families we lose generations of environmental stewardship, we lose the life blood of our communities.”

Carbon farming by big overseas corporations like Ingka is demoralising for all the farmers who have been planting trees and looking after the environment for decades. “NZ farmers are doing so much amazing environmental work, but our story is not being told.” Logan says the solution for reducing greenhouse gases is not blanket planting in short-term pine trees, it is in reducing pollution and better-managing our existing natural landscapes. The urban public might think the government is doing the right thing and helping the planet, but the truth is otherwise. “.. as the world’s most efficient farmers, we want to feed people but this government is restricting this ability at a very rapid rate.”

Logan is confident Groundswell will continue to work hard to spread the word about unworkable policies such as carbon farming, and would like to see levy bodies do more too, telling positive environmental stories of NZ farming. There may be another video or two coming from Logan, you’ll just have to keep an eye out. 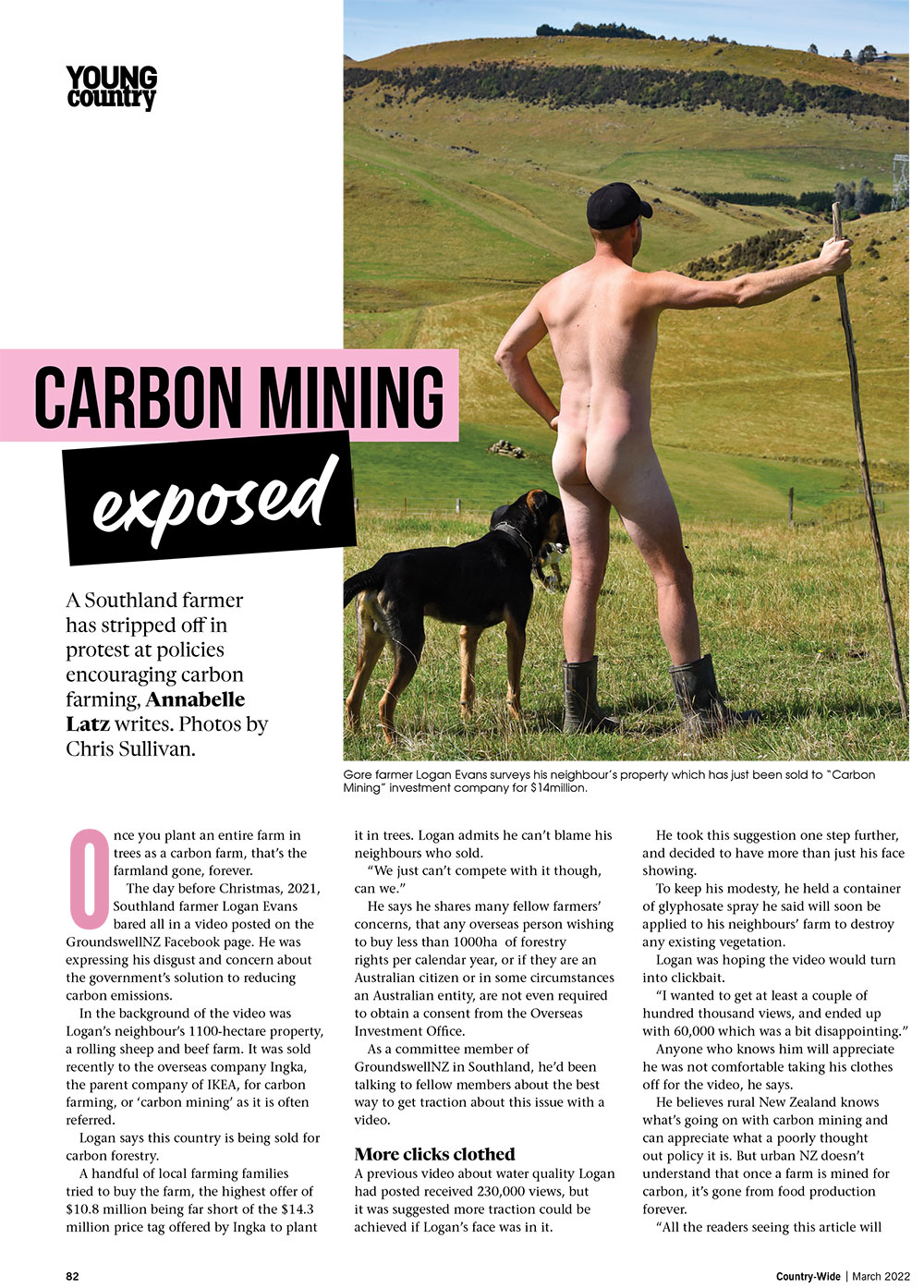 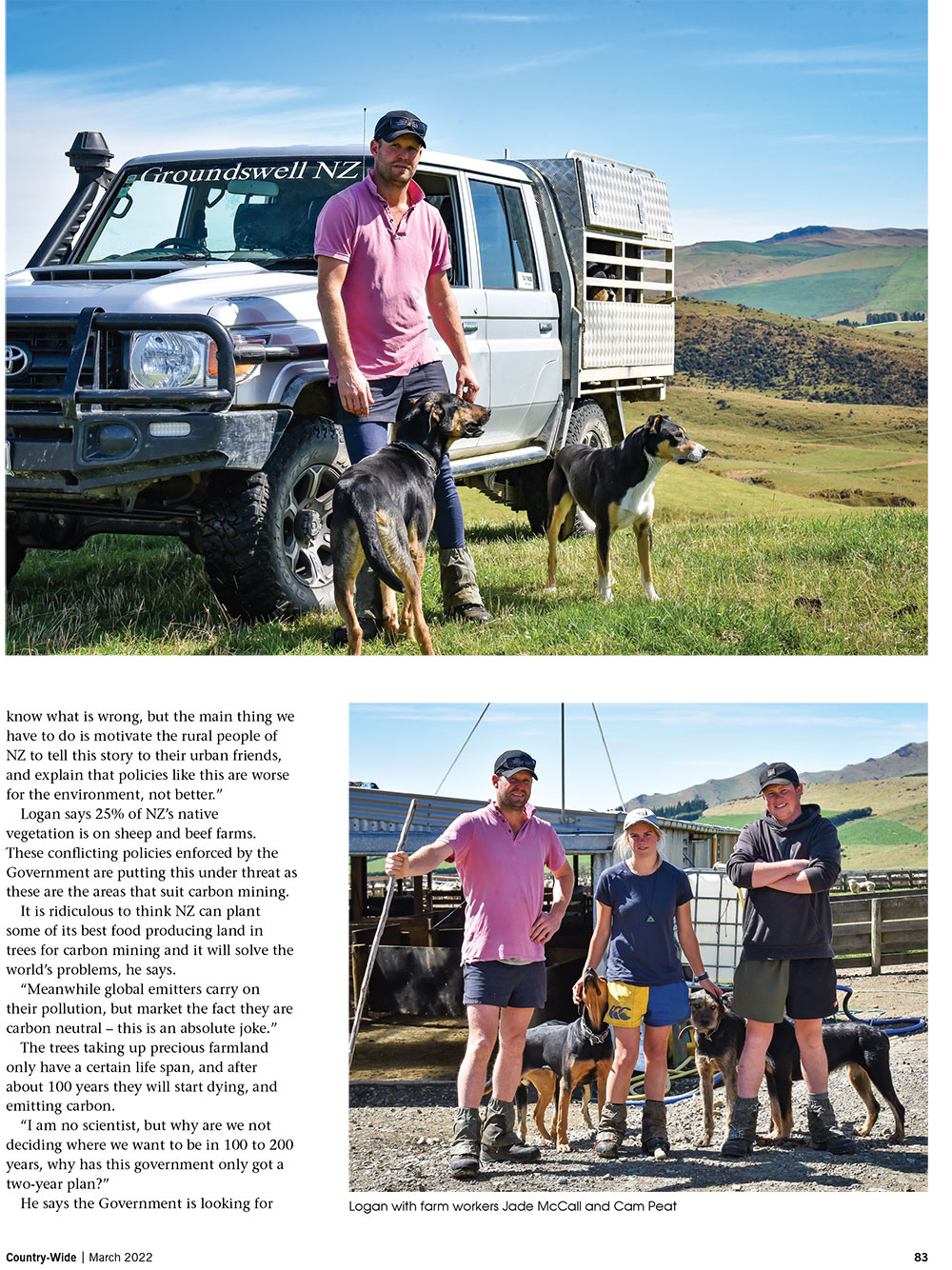 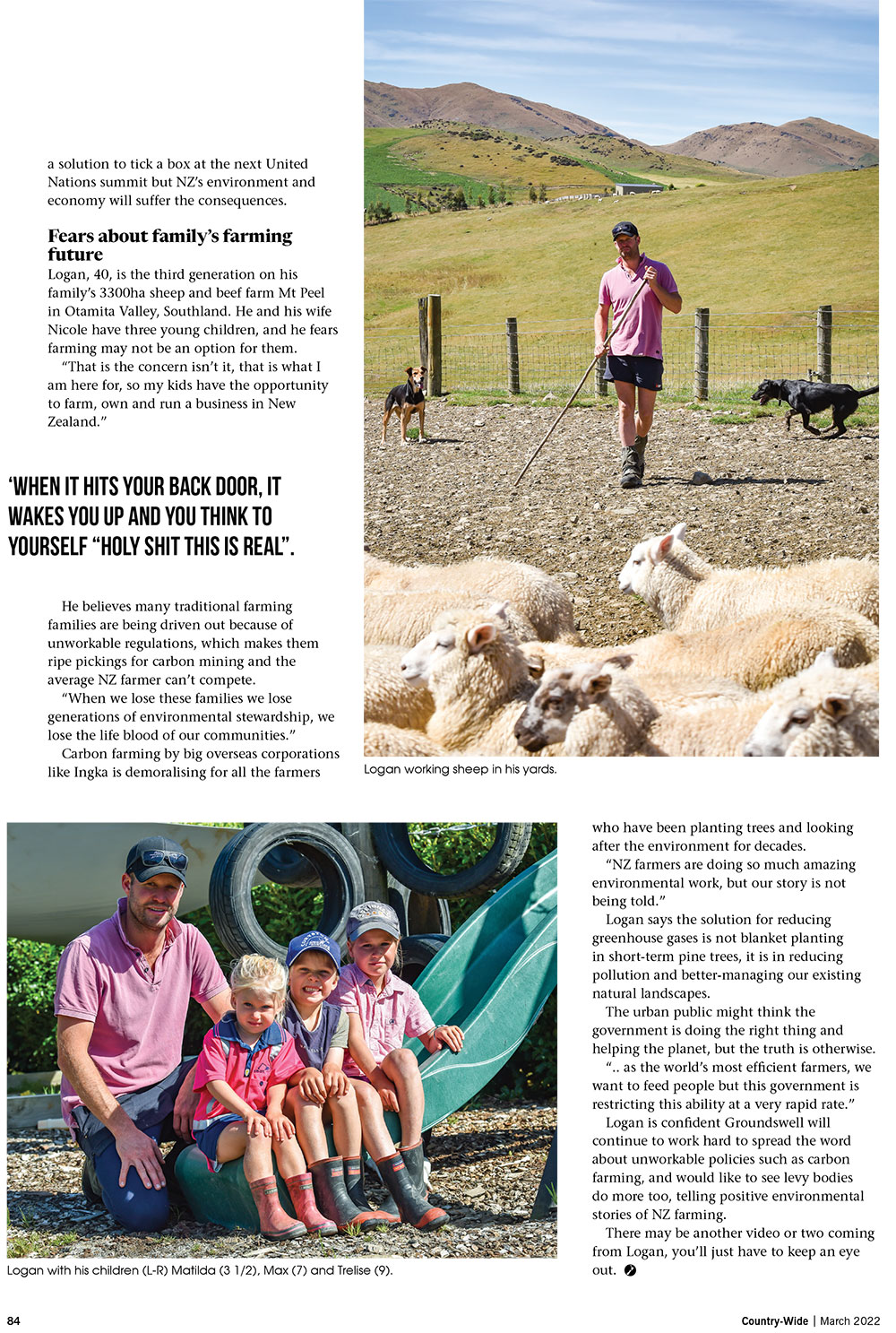