January – February, 2014 – The best thing about the days of being a full time cellar hand, was being able to scoot off overseas for stints of harvests. A case of same same but different; grapes, familiar processes, but so different at the same time. Different people, different cultures, but as for the passion for the ancient drop – well this is always in abundance. Yay.
Working with Jim Chatto and Adrian Sparks at Mount Pleasant in the Hunter Valley was just so great; continuously learning, continuously laughing.
In this particular travelling harvest I also had the added bonus of catching up with a dear friend from Ireland, and going to see Bruce Springsteen and his epic E Street Band. Totally rad.
Here’s my first blog from January 15, soon after I stepped foot in the beaut quaint spot of Mount Pleasant winery.
For a few more bits of banter, click into link below.
http://annabellelatz.blogspot.co.nz/

Wednesday, January 15
The first promise of the Hunter Valley has been delivered;
Yes. It is hot here.
Really hot. So hot yesterday in fact that the newly pressed and barrelled Chardonnay was fizzing with bungs popping all over the place today.
I am in my third day of vintage at McWilliam’s Winery, Mt Pleasant, nestled in the Hunter Valley, New South Wales.
This year’s vintage is early, both here and back home in New Zealand.  That was another promise I was delivered.
It’s like having a couple of days of revision; DAP additions, yeast additions, measuring sugar levels.
Which leads me into my first of a couple of new things I have learned this week. Well actually I have learned loads already, but I just want to mention a few.
In New Zealand we talk about brix levels when measuring the concentration of sugar levels in unfermented juice. (Discovered by Adolf Brix.) New Zealand works with new age wine techniques, commonly aligned with cooler climates.
Here in the Hunter Valley we measure sugar levels in baume, a method discovered by Antoine Baume, to indicate the potential alcohol level in unfermented juice. Thus, for wine a level of 12 is often ideal.
I was stumped for a minute yesterday when I was asked to measure the baume of some Pinot Noir picked last week, close to fermeting. This is the beauty of working a vintage at another winery in another country – constantly learning new ways and methods of producing the product we all love to enjoy.
It really was quite a sight this week, watching the Chardonnay barrels ‘wake up’ after yeast was added to them. It seemed like an infectious sneeze, one by one they started to make noise and fizz away. It seemed the yeast was getting ‘stressed’ therefore letting off an undesirable smell, as Hydrogen Sulphide was being released. A yeast additive is put into the barrels to counteract this, and the barrels are quickly put in the cool barrel hall. The climate really is against us at a time like this though, when it’s climbing towards 40 degrees outside.
Yeast really is the smell of harvest, and in a valley setting it’s hard to escape. I was enjoying an early morning run yesterday, and as I made my way around one bend in the road the whoft of yeast reached my nostrils. Delicious. Either the morning’s bread was being created, or there was some big time fermenting going on at one of the neighbouring wineries.
The wine history around here is amazing, and I can’t wait to learn more. This week I have been preparing and assessing maturity samples of semillon grapes. I wonder what age the oldest vines today are, considering McWilliam’s Winery first made its mark in the area in the 1880’s…

And some little quirks….
QUICK FUNNY STORY….Went for a cycle up the valley after work this evening, (dodging the potholes…) and came across this auld fella, who hollered at me from across the other side of the road, asking how far I was going and where I was going to… I crossed the road for a wee banter, his part of the conversation went somewhat like this….”Yea, I like to bike every second day, about 30km or 40km each time…. I’m 80 next month so I like to keep fit…. I used to ride endurance horses when I was about 60, in my younger days… got bored of that so I took up ocean swimming, about 5km races we got up to….yea, I just love my biking though…” Wow, I want to be just like him when I grow up and old. The funniest bit was when he said he was 79, and I was speechless (for once..) and said “F……. Far out, you don’t look that old!” and he replied…”you were going to swear just then, weren’t you?” “Actually no,” I said,(for once) I really was going to say Far Out, because I was. Truly. It’s rude to swear in front of old people, even when they are athletes. Like this guy. And then he told me to get some front lights. Because the sun was going down. Yes Grandad. THE END. xxxxxx

TRADE IT…I was escorted out of the supermarket the other day by a security guard. Not for something I was illegally taking out, but because I took my bike IN. I’d lost my bike lock, but chanced a quick whip around anyway, bike in tow beside my trolley – far too many wheels… Making it all the way to the chilled section of the supermarket, I thought I was home and hosed. But no.
“Excuse me, you can’t have that bike in here,” said Mr Security Guard, strolling over.
While walking out of the supermarket together, the Security Guard agreed to look after it while I finished my shopping. He was chuffed when I handed him a chocolate bar for his bike minding skills. So chuffed in fact, he decided to exchange it for a history lesson. His side of the conversation went something like this…
“Over here on holiday?…Oh, vintage, McWilliam’s Mt Pleasant eh?…Yea I know the place….I can tell you a bit about those old vineyard blocks next to the winery….you ever noticed any basalt rock lying around the place?… No? Yea, the really hard dark rock…. yea it does come from volcanoes, and yea you’re right there aren’t any volcanoes around here….. the rock came from all over Australia…..the Aborigines traded for it years and years ago… to make axe heads with it, ….there’s some still lying on the ground among the vines where you are, I’ve found the odd axe head…..yea, they traded all sorts of things for their basalt…. livestock, grain…..even wives…..yea, you could trade your wife for a good amount of basalt rock back in those days……”
Needless to say, I was quite relieved a bit of basalt rock didn’t come his way while he was minding my bike. Learning about the rock wife swap trade of historical Australia was worth losing my bike lock for, which I did in fact find again. No trade needed, it was under a pile of clothes. 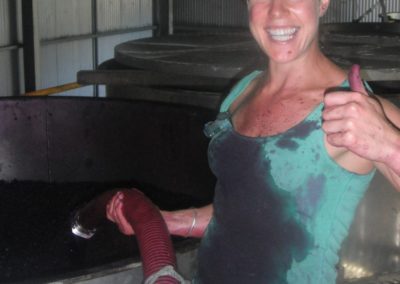 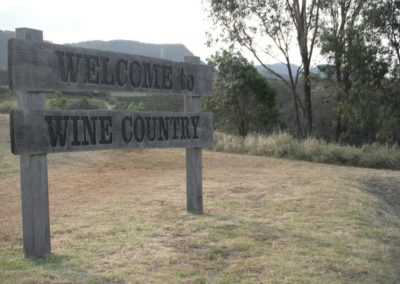 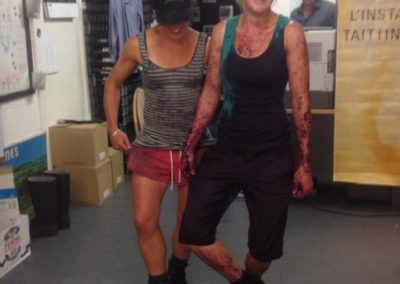 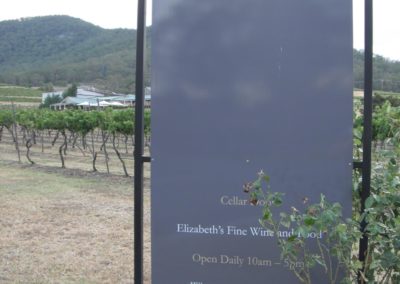 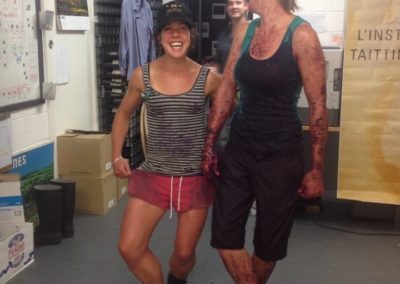 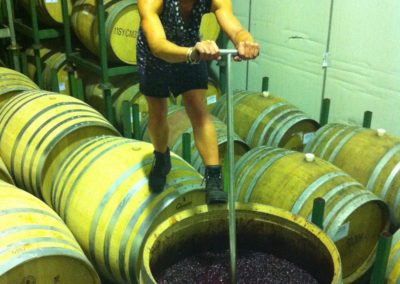 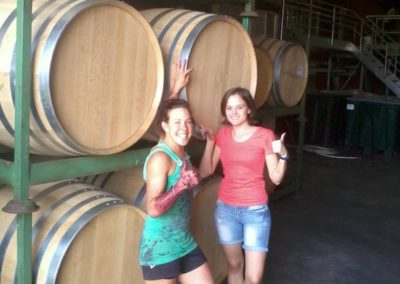 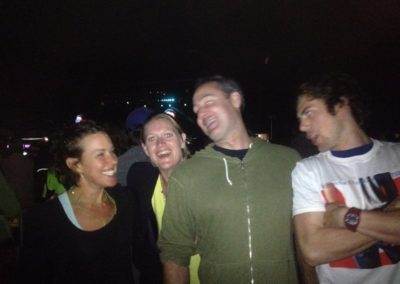 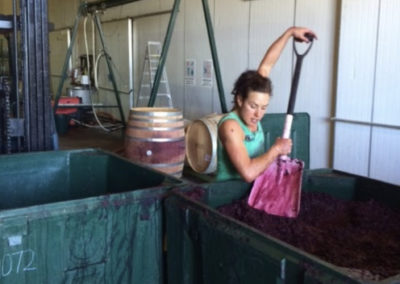 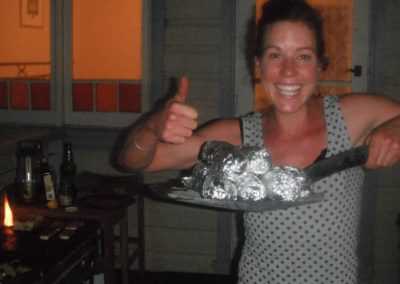 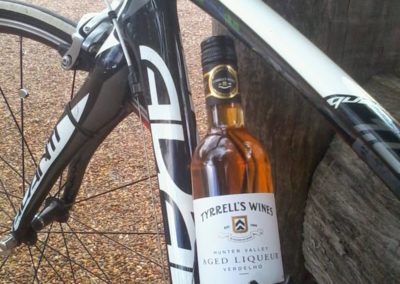 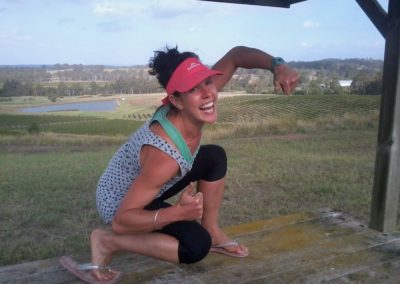 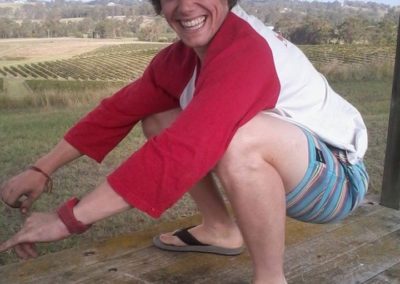 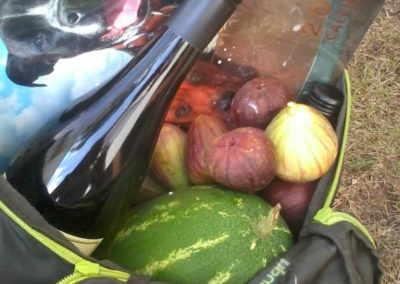 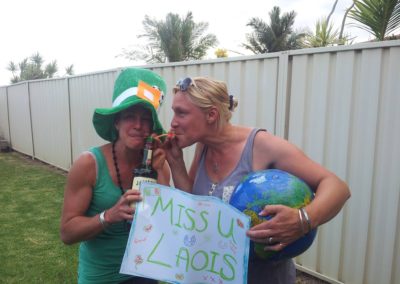